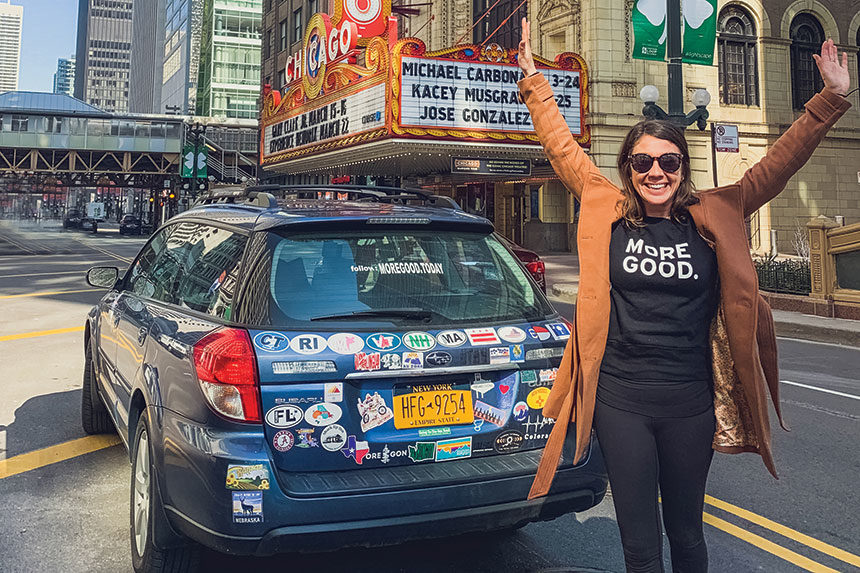 In the driveway of a stranger’s house in Crofton, Maryland, Mary Latham and I admire her late mother’s Subaru. For three years, Latham has driven the blue hatchback across America, and she shows me the 40-plus stickers that cover the back of the car — decals from Colorado and Connecticut, from Washington, D.C. and Washington state, from locations she’s visited throughout her 43,000-mile trek. Latham’s quest: To collect stories of human kindness in all 50 states, a trip inspired by her mom, who died in 2013. After the 2012 shootings at Sandy Hook Elementary in Connecticut that killed 26 people, Latham’s mom told her, “Mary, there are always going to be tragedies in the world, but there will always be more good — you just have to look for it.”

So that’s exactly what she’s doing. Part humanitarian, part documentarian, Latham, 32 — a wedding photographer from Long Island — shares her stories via social media and an email newsletter and plans to compile them for a book, which she’ll donate to hospital waiting rooms. (When her mother was ill, Latham disliked the often dismal waiting rooms, believing they “signified the loss of hope.”) Yet as Latham drives across our increasingly cynical and divided country, something fascinating has occurred. By seeking kindness, she has inspired kindness. Latham has stayed in 154 homes during her travels, welcomed as a guest by strangers. Her GoFundMe campaign has raised close to $30,000 to cover expenses. Mechanics who’ve heard her story have volunteered to service her car. Her journey attracts local media at seemingly every stop, from the Idaho Statesman to the Pittsburgh Post-Gazette. In July 2019, she appeared on NBC’s Today show, wearing her trademark T-shirt with two bold words from her mother: “More Good.” And with each stop, and each story, she shares a refreshing message: Kindness lives — and it’s nonpartisan.

“I’m in Trump homes, Hillary homes, atheist homes, super-religious homes — the common denominator is that everyone wants to be part of something good right now,” she says.

“We feel like an act of kindness has to be big, but it can be buying someone a cup of coffee. Or just smiling more.”

Latham’s subjects include people who have started nonprofits, such as Rich Akwo, the founder of Generosity Global, outside of Baltimore, which provides the homeless with home-cooked meals and daily showers. And two sisters in Chicago who each donated a kidney to a stranger after their father received a donation. But Latham also documents small acts of kindness. One of her favorite stories involves a bank teller in Rhode Island who was struggling through a difficult day. A customer asked if she was all right and the embarrassed teller said, “It’s nothing some M&Ms won’t fix.” Thirty minutes later, the customer slid a bag of M&Ms under the teller’s window. The teller never saw her again.

“She swore she was an angel,” Latham says. “I love telling that story, because that’s something we can all do. A bag of M&Ms. We feel like an act of kindness has to be big, but it can be buying someone a cup of coffee. Or just smiling more.”

In Wichita, Kansas, Latham met a woman named Julie who was shot three times during a store robbery. Because of complications during surgery, Julie lost both arms from the elbows down and both legs from the knees down. She was in the hospital for 145 days. One week after she was released, she was diagnosed with breast cancer. A philanthropist heard about her insurance struggles to obtain prosthetics and bought her two arms.

“She was telling me this story, and she’s lying on the couch, she’s about 80 pounds at this point, she’s missing half her body,” says Latham. “And she said, ‘You know, I realized I could just pull this sheet over my head with my half a limb and give up. Or I could make the best of it and help others.’” Julie now travels to hospitals and talks with patients who have lost a limb, providing both empathy and motivation.

“I think that’s a theme of all of these stories,” says Latham. “People are going through something tragic, and they immediately turn around and figure out how to help the next person. If their child dies, now they’re helping other families that lose children. If their mom dies of some weird cancer because she couldn’t afford her drugs, now they’re fundraising so people can get their treatments. The first thought is, I have to give back, I have to help, instead of wallowing in self-pity. It’s so therapeutic to keep that person’s spirit alive and help these other people.”

Honoring her mother’s spirit is certainly one of Latham’s goals. After her mom’s death, her family would receive reminders of her generosity. “She had donated her eyes,” says Latham, “and all of a sudden we got a letter that someone had their sight. It’s like this kindness was still happening even though she had passed away.”

Latham’s widowed father has supported his daughter’s journey, though he worries about her solo travels on dark roads and scary streets. “He’s been awesome, but it’s definitely stressful for him because I’m staying with strangers all the time,” she says. Her dad felt better after flying to Milwaukee and driving with her for a week, and then meeting one of her host families over dinner.

Staying with strangers may seem, well, strange, but the families provide free rooms, meals, and emotional support. “I’m traveling alone, so to feel like you have a home and a little piece of family, that’s really big,” she says. The hosts also benefit. They hear Latham’s stories, learn about unknown heroes in their communities, and are simultaneously charmed, moved, and changed by their road-tripping guest.

“The night and the weekend that Mary stayed with us were transformative for me, and I don’t use that word lightly,” says Michael Quesnell, whose wife overruled him and invited Latham to stay at their home in Ohio. Quesnell admits that he is not a touchy-feely guy and was reluctant to host a stranger. The camaraderie, however, was instantaneous. “I’ve found myself looking for ‘more good’ based on Mary’s mom’s promise that it’s out there if you look,” he says. “I have been able to see instances of kindness and thoughtfulness by others that I had otherwise skipped over.” And he is impressed by Latham’s fearlessness. “Can you imagine staying with all of these random strangers? How many of us talk about flipping the script on our lives and taking action on something meaningful. She’s been doing it for years. It’s extraordinary.”

In my own encounter with Latham in Maryland — the 44th state on her trip — I found that when you’re with her, you feel … good. By recording ­stories of generosity, sacrifice, and love — by being a repository of human kindness — she seems to radiate all that she’s learned. Which is not to say that her journey is easy. Three years of driving has stiffened her back and knees. Many of the people she’s met have endured terrible suffering. But the experiences have left her wiser and more empathetic.

“With this trip, I’m always stressed,” she says. “And I think, Okay, well, Julie got up, she walked down the stairs, she doesn’t have legs. I can go through my day. You constantly create this thing in your head where it’s like, she’s doing it, I can do it.”

In November 2019, Latham flew to Hawaii, the last state on her list. If she’s learned a lesson from her trek across red-and-blue America, it’s that our divisions are overstated. The people she’s met in the Northeast, she says, are the same as those in the South. She shares a quote that she heard in her travels: “Exposure creates empathy.” The more you travel and talk to people, the more you can understand their views — and the more you realize that kindness exists, in the biggest cities and smallest towns, just like her mother said.