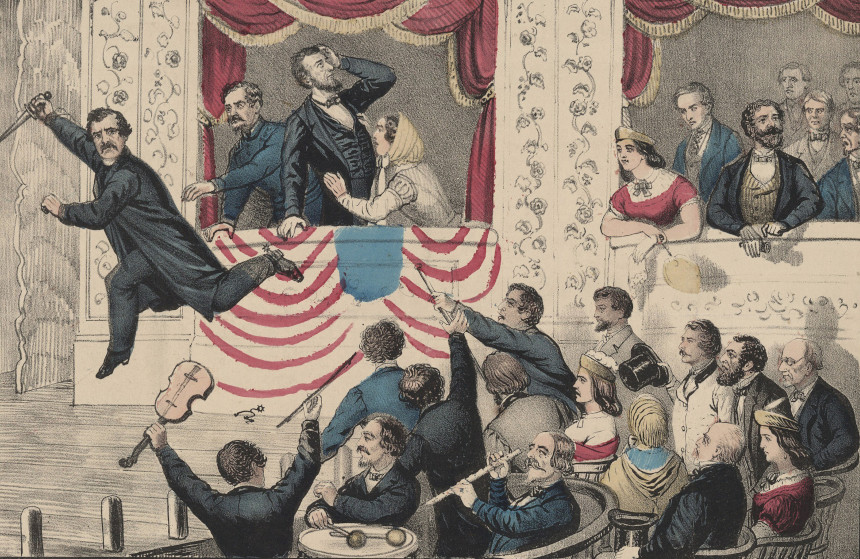 President Lincoln and his wife this evening visited Ford’s Theatre to witness the performance of Our American Cousin. … The theatre was densely crowded, and everybody seemed delighted with the scene before them.

During the third act, and while there was a temporary pause for one of the actors to enter, the sharp report of a pistol was heard, which merely attracted attention, but suggested nothing serious, until a man rushed to the front of the President’s box, waving a long dagger in his right hand and exclaiming, “Sic Semper Tyrannis!” and immediately leaped from the box, which was of the second tier, to the stage beneath, and ran across to the opposite side, thus making his escape, amid the bewilderment of the audience, form the rear of the theatre, and, mounting a horse, fled.

The screams of Mrs. Lincoln first disclosed the fact to the audience that the President had been shot, then all present rose to their feet, rushing toward the stage, many exclaiming, “Hang him! hang him!”

The excitement was one of the wildest possible description, and there was of course and abrupt termination of the play.

There was a rush toward the Presidential box, when cries were heard, “Stand back!” “Give him air!” “Has anyone stimulants?”

On a hasty examination, it was found that the President had been shot through the head above and back of the temporal bone, and that some of the brain was oozing out. He was removed to a private house opposite to the theatre, and the Surgeon General of the Army and other surgeons were sent for to attend to his condition.

A military guard was placed in front of the private residence to which the President had been conveyed. An immense crowd gathered in front of it, all deeply anxious to learn the condition of the President. It had been previously announced that the wound was mortal, but all hoped otherwise. …

It is now ascertained with reasonable certainty that J. Wilkes Booth was the one who shot the President. The military authorities have dispatched patrols in ever direction, in order, if possible, to arrest the assassin, while the Metropolitan Police are alike vigilant for the same purpose.