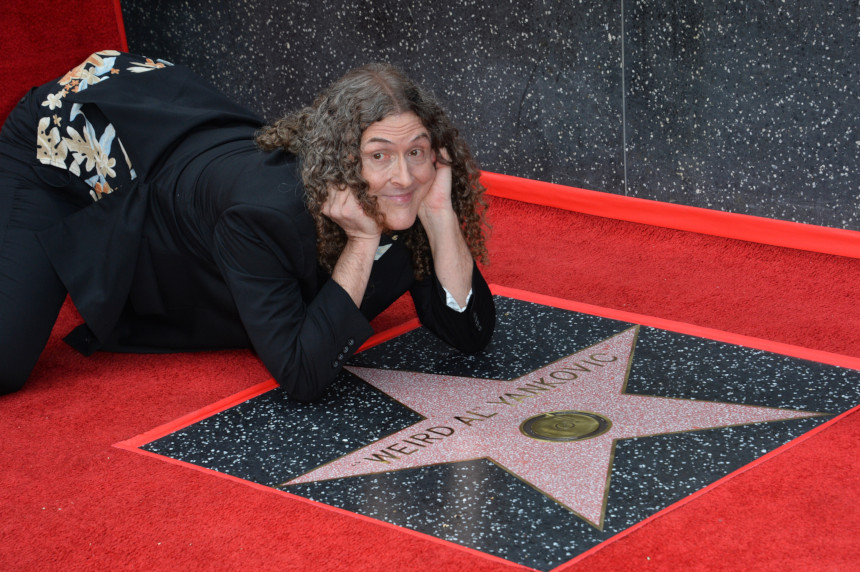 Let’s face it; millions of people are weird. A good number of people, from stand-up comics to circus performers of various stripes, even get paid to be weird professionally. But there’s really only one person carries the name as a title, like a badge of honor. Of course, we’re talking about “Weird Al” Yankovic. Though he’d been a growing presence on the radio in the late ’70s (thanks to beloved radio host Dr. Demento and others), Yankovic planted a musical flag with his debut EP, Another One Rides the Bus, 40 years ago this month.

The things that set Yankovic apart are his cleverness and staying power. His frequently accordion-driven work has led to five Grammys, multiple #1 albums, and more than 12 million albums sold. Yankovic’s ability to adapt to trends and deftly parody and imitate different types of music has kept him popular, as have his ridiculously funny music videos, many of which are directed by Yankovic himself.

Following are a baker’s dozen of the biggest moments in a lifetime of weirdness.

Yankovic was born on October 23, 1959. He started playing the accordion when he was six after a door-to-door salesman stopped by his house selling music lessons. Yankovic was a fan of comedy both in and out of music. He listened to The Dr. Demento Show, which regularly featured comedic artists; in 1976, Yankovic met Demento after a speaking engagement and gave him a tape of some of his parodies. Demento played one on his show, giving Yankovic a boost. He continued to put parodies together; while DJing for his college radio station, Yankovic adopted the name “Weird Al” (wryly noting it was what people called him in the dorm). In 1979, he took a swing at The Knack’s wildly popular “My Sharona” with “My Bologna;” not only did Demento play the tune, but Doug Fieger of The Knack helped get Capitol Records to release it as a single.

“Another One Rides the Bus” (Uploaded to YouTube by alyankovic)

While appearing on another Demento episode, Yankovic recorded a new song parodying Queen’s “Another One Bites the Dust.” He had just met drummer Jon Schwartz and invited him to bang along to his performance on Yankovic’s accordion case. Another One Rides the Bus would also be the name of Al’s debut EP. The EP contained the title tune, style parody “Happy Birthday,” and two originals. Using money borrowed from Dr. Demento, Yankovic pressed 1000 copies of the EP and sold them on consignment through his own label, Placebo Records. Yankovic’s increasing radio profile and his DIY EP sales caught the notice of TK Records, who released “Bus” as a single. Yankovic got his first national TV exposure that April, appearing on Tom Snyder’s The Tomorrow Show to perform “Bus.” Schwartz accompanied Yankovic; soon after, Yankovic asked Schwartz to be his full-time drummer and dubbed him Jon “Bermuda” Schwartz. Schwartz has been Yankovic’s drummer ever since. Schwartz has become the official Al historian and web designer as well.

“I Love Rocky Road” (Uploaded to YouTube by alyankovic)

“Weird Al” Yankovic hit stores in 1983, marking Yankovic’s first full-length album. The record was produced by guitar legend Rick Derringer, who had hits like “Hang On Sloopy” with The McCoys and “Rock and Roll, Hoochie Koo” as a solo artist. Derringer was very instrumental in Yankovic’s early career, securing the young artist free studio time (to be paid at a later date) in order to record the album; Derringer would produce Yankovic’s next five albums as well. The debut album included the material from the Bus EP, as well as “My Bologna” and seven additional songs. The breakouts included “I Love Rocky Road” (a parody of Joan Jett & The Blackhearts’ “I Love Rock ‘n’ Roll”) and “Ricky” (a take on Toni Basil’s “Mickey”). Both songs had music videos produced, and Yankovic toured for the first time. “Ricky” is considered to be the first comedy video played on MTV; the Lucy part for the song was performed by Tress MacNeille, a voice actress best known for voicing Babs Bunny (Tiny Toon Adventures) and Daisy Duck (since 1999).

The lead single from Yankovic’s second album, “Weird Al” Yankovic in 3-D, was “Eat It,” a parody of Michael Jackson’s insanely popular “Beat It.” The song and video were hugely successful, taking Yankovic to #12 on the pop charts. The video’s popularity led to Yankovic’s first Al TV special that same year; Al TV would become a recurring series of specials over the years, with 10 episodes appearing on MTV and VH-1 between 1984 and 2006. The guitar solo on “Eat It” was performed by Derringer, who approximated Eddie Van Halen’s signature tone from the original recording. Yankovic’s polka medley on the album, “Polkas on 45,” was very punk heavy, including snippets of tunes by The Plasmatics, Jim Carroll, Black Flag, and Devo, among others. The album was Yankovic’s true breakthrough, going Gold in the U.S. (with sales in excess of 500,000) and spending three weeks at #17 on an extremely competitive album chart.

The UHF trailer (Uploaded to YouTube by Movieclips Classic Trailers)

Yankovic released three more albums between 1985 and 1988; 1988’s Even Worse remained his best-selling album until 1992. In 1989, Yankovic co-wrote and starred in the comedy film UHF, a parody of television programming, specifically local cable-access TV. Reviews were mixed, but the kiss of death for the film was that it happened to arrive in the middle of what’s frequently been referred to as “The Blockbuster Summer.” Hitting screens in July of 1989, UHF found itself slugging it out with Batman, Indiana Jones and the Last Crusade, Ghostbusters II, Lethal Weapon II, When Harry Met Sally, and Honey, I Shrunk the Kids. The film has become something of a cult classic, but it was viewed as a setback at the time. Fortunately for Yankovic, the face of popular music was about to change again, and he’d once again successfully parody the new sound.

Yankovic has remarked the he deliberately waited a bit before releasing Off the Deep End because he was sort of waiting for the “next big thing.” He hit two bumps in the road when usually reliable parody subjects Michael Jackson and Paul McCartney, who had supported and/or given permission for Yankovic to cover their work in the past, turned down requests. Yankovic’s request for “Black or White” was rejected because Jackson wanted to preserve the message of the song, and the request to do a “Live or Let Die” parody (“Chicken Pot Pie”) was turned down because of McCartney’s long-time vegetarian status. As luck would have it, the Alternative Explosion of late 1991–early 1992 arrived, and Yankovic was struck for an idea for Nirvana’s “Smells Like Teen Spirit.” Kurt Cobain thought that Yankovic’s notion of using listener’s inability to distinguish Nirvana’s lyrics was funny, and gave his permission; Nirvana drummer Dave Grohl recounted that being parodied by “Weird Al” was how the band knew that they’d actually arrived. The song took Yankovic back to the Top 40 and the album went Gold and was nominated for a Grammy. The “Smells Like Nirvana” video has been listed by Rolling Stone magazine as one of the 100 greatest of all time.

One of the few times in his career that Yankovic encountered real controversy came with the release of “Amish Paradise” from Bad Hair Day. While Yankovic did get permission from the record company to parody “Gangsta’s Paradise” by Coolio (which would also include royalties for Coolio), the hip-hop artist disagreed with the decision, complaining about the issue in various interviews. Yankovic later said that he wrote an apology to Coolio. Over time, the two artists mended fences, and Coolio has since stated in that his initial refusal was a bad decision and that he finds the Yankovic take to be funny.

Though Yankovic had parodied Star Wars previously with “Yoda” (based on “Lola” by The Kinks) in 1985, he returned to the films for the release of the first prequel, Star Wars Episode I – The Phantom Menace. The song, which recounts the movie’s plot, is set to Don McLean’s “American Pie.” For the video, Yankovic dressed as Ewan McGregor’s young Obi-Wan Kenobi from the film. Personnel at Lucasfilm told Yankovic that Star Wars creator George Lucas was delighted by the song.

One of Yankovic’s fastest parody turnarounds came in 2006 when he did “White & Nerdy,” a take on Chamillonaire and Krayzie Bone’s “Ridin’.” The original was #1 in July, and Yankovic’s parody landed in September. The “Weird Al” version became the artist’s first Top Ten hit, peaking at #9, and it was certified Platinum with over 1,000,000 singles sold. Sales were powered in part by digital platforms, which marked a hint of things to come for Yankovic. The “White & Nerdy” video was well received online, and featured cameos by Donny Osmond, Key & Peele, Seth Green, and Judy Tenuta.

Another controversy, but with a faster, happy ending, occurred in 2011. Yankovic had hoped to make a parody of Lady Gaga’s “Born This Way” a big part of his pending album, Alpocalypse. However, when he sought permission for the parody, he was told by her management that he needed to provide lyrics and a recorded version of the song; after Yankovic jumped through the hoops, he was rejected by Gaga’s manager, throwing the album release into upheaval and forcing Yankovic to postpone it. Seeking to turn the situation into a positive, Yankovic put the song online and encouraged donations to the Human Rights Campaign. Then, the truth came out; Gaga had never even heard the song. Within a day of it going online and taking Twitter by storm, Gaga had given her approval and Yankovic was able to get the song on the album.

In 2014, Yankovic finally claimed a #1 album. Rather than put out singles, Yankovic released music videos for eight of the songs on the album. The break-out was “Word Crimes,” a grammar-fueled parody of the Robin Thicke/Pharrell Williams/T.I. song “Blurred Lines.” Yankovic won the Best Comedy Album Grammy for the work. He also noted at the time that Fun was probably his last traditional album, with further releases created for the digital and online video markets that have mostly supplanted older avenues for music.

Yankovic participated in the “Hamildrop” series of releases by artists covering songs that appear in the Broadway smash, Hamilton: An American Musical. In consultation with Hamilton creator Lin-Manuel Miranda (an admitted huge fan of “Weird Al”), Yankovic weaved 14 tunes into one of his patented polka medleys, adorning it with his trademark collection of sound effects. Yankovic and Miranda appeared together on The Tonight Show with Jimmy Fallon to discuss the song, which Fallon referred to as Yankovic’s masterpiece.

Yankovic took an extremely rare dive into political commentary in September of 2020. Mere hours after the September 29, 2020, debate between then-president Donald Trump and Democratic candidate Joe Biden, Yankovic and collaborators The Gregory Brothers dropped a fully formed song and video incorporating clips from the broadcast. They went in hard on issues facing the country and the world. The video was widely praised by outlets like Rolling Stone; its remarkably fast turnaround signals that not only is Yankovic an incredibly gifted parodist, but that he still has reserves as an artist that he has not yet begun to display.