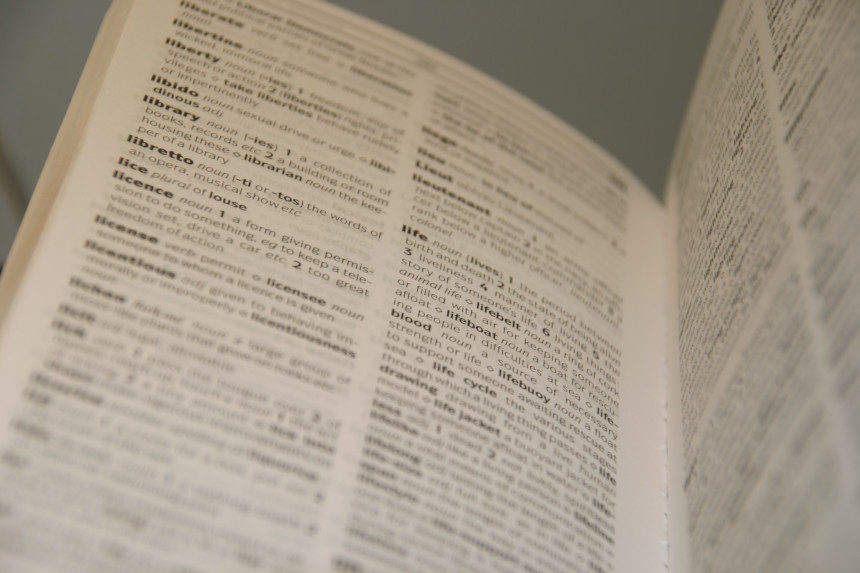 In the world of words and those who love them, there are few works held in higher esteem than the venerable Oxford English Dictionary (the OED). Often referred to as a definitive repository of the English language, it is a vast (and if you’re lucky enough to own a physical copy, hefty) tome that contains virtually all the words English has to offer.

Lots of people assume that if a word isn’t in the dictionary (the OED or otherwise) it’s “not a real word.” As dusty-seeming as the OED is, it’s a vibrantly alive resource. It is constantly changing, with new words added every year, and definitions of old words being edited and expanded as their use demands. The “obvious when you think about it” reality is that at one point there were no dictionaries, but there were still words.

The process of dictionary writing (by extremely sexy word nerds called “lexicographers”) is painstaking and precise, but it’s also observational. Lexicographers look at what people are doing with language; paying close attention to shifting senses and definitions in order to make their dictionaries reflect the language around them, not to dictate to people how they ought to be using words.

If you look up a word in the OED, you’ll find not only definitions, but also a list of examples of places where that word has been used over the years, decades, and centuries. If you’re a fan of etymology (the study of how words come to mean what they do) the earliest cited source is often the first place you’re looking. The list of authors and publications contributing the first source for words in the OED is illustrious, with the Big Names including Shakespeare, Chaucer, Beowulf, The Times of London and the Wycliffite Bible. Also on that list is your very own Saturday Evening Post, credited with the earliest written source of dozens of words in the OED.

What follows is a brief tour through some of The Saturday Evening Post’s various contributions to the ever-growing lexicon of the English language.

This American (and not often affectionate) nickname first appeared on page 9 of the November 16, 1907, edition, in a story by Owen Johnson called “The Great Pancake Record,” about a scrawny boy named “Hungry” Smeed who wins over his boarding school thanks to his outrageous and outsized appetite. The nickname was given to him by a senior boy named Hickey, whose “genius,” according to Johnson and immortalized in the OED, “lived in the nicknames of the Egghead, Beauty Sawtelle, Morning Glory, Red Dog, Wash Simmons and the Coffee Cooler, which he had bestowed on his comrades with unfailing felicity.”

One of the best reasons for publications of all stripes to (at least occasionally) loosen up on their writing styles to allow for slang, colloquialisms, and dialectical phrases is that we then can finally get a written record of language as it’s actually used. This word shows up first in a story by Ring W. Lardner called “Carmen” from February 19, 1916. The entire piece is written in a very casual, conversational tone that I’m sure some at the time clutched their pearls over. The opening lines are “We was playin’ rummy over to Hatch’s, and Hatch must of fell in a bed of four-leaf clovers on his way home the night before…” The word “goof” makes its entry into the written lexicon when that same Hatch protests the idea of paying for seats at the opera because he “don’t never go to the same show twice” and the narrator berates him by saying “it ain’t the same show, you goof! They change the bill every night!”

You know how you probably call all facial tissues ‘kleenexes’, and say you’ll “google” something, when you may well use another search engine entirely? Well, “klaxon” is the same. It’s called a generonym – a word that starts as a company or brand, and through sheer popularity and ubiquity becomes the word for anything of the same type. In this case, the word first appears in print form on September 17, 1909, in a full-page ad for “The Klaxon,” a brand new and exciting car horn!

The OED is undecided whether this word was originally borrowed from German (schleppen) or Yiddish (schlepn), but what is completely clear is that it first appeared in print on April 22, 1911, in a story by Montague Glass titled “Serpent’s Teeth.” It’s another example of how writing the way people actually talk enriches the written record of English (or indeed any language). Also, if you trace the history of the Yiddish and German words, you arrive at a Proto-Indo-European ancestor that also gives us the English words “slime” and “slight.”

It may conjure images of Moe, Larry, and Curly cramming themselves through a doorway, or possibly some low-level lacky on a gopher-type job for their boss, but the word originally referred to a stagehand in theatre and early cinema. It first appears in print on November 1, 1913, in “Water Stuff,” a story about a particularly challenging bit of filming on board a ship at sea by Charles E. Van Loan:

Then, after the jumps, we’ll go still farther away with the tug, so we can cut in the whole ship; then turn loose the whole works – smoke-pots, oakum, red fire and all. Give her everything you’ve got; and see that none of your stooges show their heads over the rail.

Well there you have it. Five of the 32 words The Saturday Evening Post has contributed to the OED. The best part is that it’s an ongoing process; the next time you come across a word that you’ve not seen in print before, remember that you may be looking at a little slice of history in the making!

All 32 Words that First Appeared in The Saturday Evening Post