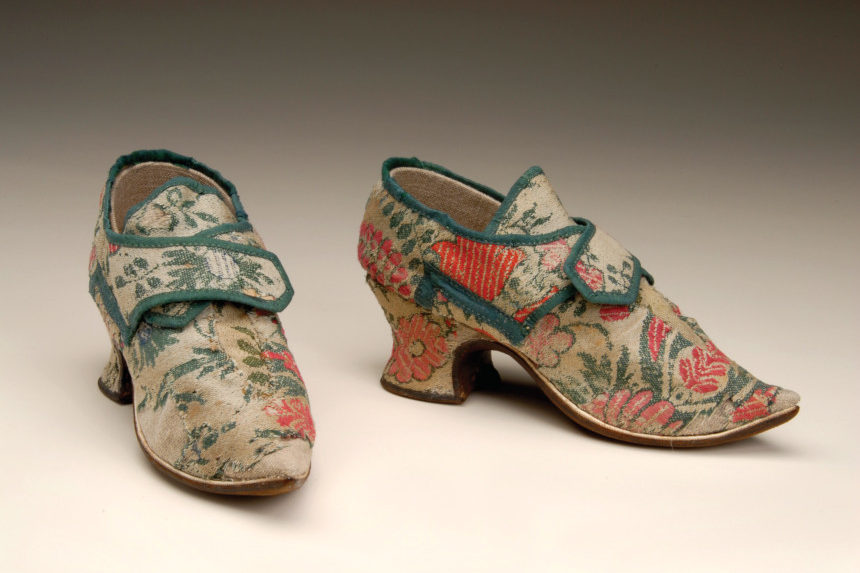 None the worsted for wear: Dating to the 1730s or 1740s, these calamanco shoes feature an eye-catching pink and green brocaded wool on a cream wool ground, covering both the upper and the heel of each shoe. (Courtesy Historic Deerfield, photo by Penny Leveritt)

If you were a wealthy or middle-class woman living in British America around the time of the Revolution, you probably owned a pair of calamanco shoes. Like sneakers or black pumps today, calamancos were the everyday footwear of early American life: practical clothing items that can reveal a great deal about the day-to-day lives — and aspirations — of their owners.

But first, what was calamanco, this special item coveted by women of wealth and women of the middling sort? Calamanco (also spelled callimanco, calimanco, or calamink) is a worsted wool textile finished with a glossy, glazed surface created by forcing the cloth through hot rollers. Historians trace the earliest usage of the term back to the late 16th century. Some scholars attribute the derivation of the word from a modification of Spanish calamaco, from the Late Latin word calamaucus, referring to a felt cap or skullcap.

Early American consumers got most of their calamanco from Norfolk, England. They appreciated the fabric’s ability to take bright colors, such as the vibrant reds and yellows fancied in the early part of the 18th century, and the elegant greens that became the fashion by mid-century. But calamanco also worked for plain, damasked, or brocaded weaves.

Early Americans adopted calamanco for clothing, including petticoats, waistcoats, and shoes, and for an assortment of household uses, such as bed coverings. Calamanco remnants from a petticoat or waistcoat could be repurposed for many items, including quilts or stays (similar to what today is known as a corset). Because it was so adaptable, historians routinely find calamanco wool in probate inventories. It was tremendously useful, and thus, even though it was common, considered an item of value.

Calamanco shoes — especially popular between the 1730s and the 1780s — were practical in New England, as they offered more warmth and durability than silk. Their glazed surface could withstand a bit of dirt and poor weather and could be surface cleaned on a regular basis. The shoes were also an affordable choice, available in differing qualities. Dozens of references to the shoes can be found in the account books of merchants and country traders in places such as Deerfield, Williamsburg, Boston, Portsmouth, and Lynn. When shoe scholar Nicole Rudolph examined New England newspapers between 1775 and 1883, she found 408 ads mentioning ladies’ shoes; of those, a quarter were for calamancos.

Calamanco shoes challenge the conventional wisdom that early Americans lived in an “age of homespun.”

Other colors were available, too. There are frequent references in account books and advertisements to pink calamancos, for instance, for young girls. Red calamancos and red wool broadcloth shoes, meanwhile, were favorites for wedding shoes, showing up extensively in paintings and prints of the time.

But while modern museum ­collections generally showcase more luxurious footwear — damasks, or brocaded or embroidered silks — a visitor would be challenged to find even a single pair of calamancos. This raises a question: If the calamanco shoe was so ubiquitous, why isn’t it better remembered today? There are a number of reasons for this: Wool shoes face a particular threat common to historic garments — insect infestation. Woolen fabrics provide a satisfying meal for moths, insects, and other vermin. Because calamancos are nourishing and good for nesting, few examples have ­survived.

Another culprit may be the calamanco’s very ordinariness: It was the pedestrian nature of this footwear that accorded it so little notice. It may seem an odd practice to us in the age of fast fashion, but shoes of the era held their value, and both men and women frequently made gifts of footwear to their intimates. Calamanco shoes were frequently passed along to family members or trusted servants. As a workaday shoe, the calamanco was worn again and again until it wore out. Once its last owner was done with it, she simply tossed it into a privy (the early American trash dump) where it became compost.

In contrast, more elaborate, costly shoes, such as those made from silk damask or silk brocade — special-­occasion footwear, such as a bride might wear to her wedding — became imbued with family history and were preserved for safekeeping. These cherished pieces were passed down through the generations and treasured by families and are housed in museums today. Until recent decades, calamancos were not prized highly by most collectors or institutions. When confronted with a well-worn or very simple shoe, utilitarian in appearance, museum curators with limited budgets might have previously erred on the side of “beauty” or the historic importance of the wearer. Only as interest in the history of everyday people grew in the 1960s and 1970s did museums begin acquiring calamanco shoes.

Calamanco shoes challenge the conventional wisdom that early Americans lived in an “age of homespun.” This mythology of self-sufficient households became firmly rooted during the colonial revival movement of the 1890s to 1920s and has continued uncontested until recent decades. Evidence from advertisements, inventories, and correspondence reveals a somewhat different story regarding the woolen shoe. It is a rich example of how a textile was transferred from Europe and adapted to a multitude of American uses.

Even shoes manufactured domestically largely relied on wool ­produced in Norwich, and when choosing between a domestic shoe and an ­English-made shoe, those with means frequently opted for British shoes, never mind the Revolution in the air. But in the 1760s and 1770s, American shoemakers and merchants aggressively stepped up their promotion of American manufacturers — and as time went on, the selection of American calamanco shoes, manufactured in large numbers in Lynn, Massachusetts, and elsewhere, in a small way came to represent colonial economic independence versus being tethered to the yoke of trade dominance by Great Britain. Locally made calamanco shoes became synonymous with “appropriate” footwear for women embracing the patriot cause. A January 1765 advertisement from Boston boasted of “… women’s callimanco shoes Lynn-made, as neat, and much stronger than any imported from England.” That same year and month, Philadelphia shoemaker Alexander Rutherford alerted his customers “resolved to distinguish themselves by their patriotism and encouragement of American manufactures, that he makes and sells all sorts of worsted or wool shoes, of all sizes, as neat and cheap as any imported from England.” By 1770, Lynn-made shoes had such a good reputation in Boston that merchants proudly trumpeted their origin, pairing them in the same advertisement with calamancos from England (which some wealthier American women still wore).

Examining the calamanco shoe as a historical document brings us closer to understanding the lives of women in early America — the work they did, the ways they shopped, and how their purchases came to reflect emerging patriotic values.

Kimberley Alexander teaches museum studies and history at the University of New Hampshire. Her most recent book is Treasures Afoot: Shoe Stories from the Georgian Era. This essay is part of What It Means to Be American, a project of the Smithsonian’s National Museum of American History and Arizona State University, produced by Zócalo Public Square.

Featured image: None the worsted for wear: Dating to the 1730s or 1740s, these calamanco shoes feature an eye-catching pink and green brocaded wool on a cream wool ground, covering both the upper and the heel of each shoe. (Courtesy Historic Deerfield, photo by Penny Leveritt)