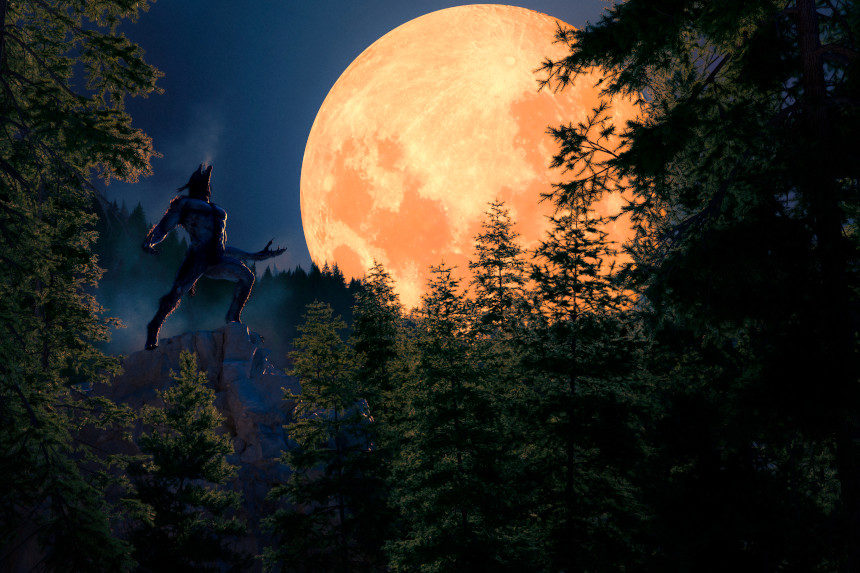 You can call it zeitgeist. You can call it ideaspace. You can even call it coincidence. However you label it, there’s occasionally a fundamental alignment where multiple creatives end up working on the same kind of project at the same time. That’s how you can end up with several Wyatt Earp films in the same year or more than one book from the point of view of Jack the Ripper or even several firehouse dramas.

Forty years ago, in 1981, big Hollywood studios released not one, not two, but three werewolf-related pictures within a span of five months: The Howling, Wolfen, and An American Werewolf in London. It was an unusual move, not just because of the overall comparatively smaller frequency of werewolf films, but also because the films all hit in spring and summer, rather than around Halloween. Here’s a look at 1981, Hollywood’s werewolf year.

Historically, the werewolf hasn’t headlined as many films as, say, vampires or, more recently, zombies. The idea of people transforming into animals is a common trope in myth and folklore, and the most frequent representations in American film tend to be drawn from European legend. The first film to show a half-man/half-wolf on two legs was Universal’s The Werewolf of London in 1935. That was followed by Lon Chaney, Jr.’s iconic turn as Larry Talbot in The Wolf Man in 1941. Talbot appeared in four more films during that decade. Werewolves would turn up here and there; Hammer Studios cast Oliver Reed in The Curse of the Werewolf in 1961, and Paul Naschy played his werewolf character, Count Waldemar Daninsky, in a dozen Spanish films and co-productions. It’s not like the monster never appeared; it just did so with a less frequency than other types (for perspective, there were roughly 154 werewolf or werewolf-related films total by 2019 versus 170 filmed versions of Dracula alone).

The 1981 surge is mostly coincidence. The seeds of that year’s films started getting planted in the late 1960s. While working on the film Kelly’s Heroes in Europe, John Landis was struck by local Yugoslavian Romani performing a graveside ceremony. That occurrence coalesced into the idea for a darkly comedic horror screenplay that Landis finished and stuck in the fabled “writer’s drawer,” partially because some parties found it too funny to be scary or alternately too scary to be funny. After having several successes as a director of comedies like Animal House and The Blues Brothers, Landis finally got the backing to make An American Werewolf in London.

At the same time, two 1970s novels had been moving through the development process. The first was Gary Brandner’s 1977 novel, The Howling, which was the first of a trilogy for the writer. The tone of the novel doesn’t quite have some of the underlying humor that creeps in at the edges of the screenplay; that’s most due to John Sayles, who came in when director Joe Dante asked him to doctor the earlier drafts. Sayles completely retooled the script, keeping some elements of the novel but also working in some satire on the media and self-help movements.

The other novel was Whitley Strieber’s Wolfen. The 1978 novel isn’t properly a werewolf novel; the title species makes its appearance as a heretofore undiscovered predator that’s now feeding off of humans in the urban jungle. Michael Wadleigh, best known for making the Woodstock documentary, pulled the directing assignment; the screenplay by Wadleigh, David M. Eyre, Jr., and an uncredited Eric Roth pulls the story closer to class war and environmental concerns, with the plight of the Wolfen (who look more like standard wolves) echoing how Native Americans have been treated.

As all of these projects were coming together at their various studios (Embassy for The Howling, Warner Bros. for Wolfen, and Universal for American Werewolf), one significant thing would tie them together: the quantum leap forward that film special effects had made in the decade prior. While some of the earlier monster films had breakthrough make-up and transformations that were riveting for their time, the effects and creature designs that had advanced under the likes of Kubrick on 2001: A Space Odyssey, Lucas on Star Wars, and other filmmakers and artisans were now available for horror filmmakers, too.

Rick Baker was originally set to do special make-up effects on The Howling, but he elected to switch to American Werewolf. Baker, who had previously worked with Landis on Schlock, would become one of the most celebrated craftsmen in his field. He passed the baton on Howling to Rob Bottin, whom Baker had mentored; Bottin had worked on Star Wars, even appearing as one of the members of the Cantina band. Both Bottin and Baker would apply their considerable talents and cutting-edge artistry to their respective films, resulting in what are two of the finest transformation sequences in horror on screen. Both scenes would propel interest in the films through both critical praise and word-of-mouth.

The transformation scene from The Howling (Uploaded to YouTube by ScreamFactoryTV)

The Howling hit screens first, debuting in March of 1981. The film did well critically, and nearly made back its cost on the opening weekend. It was a decently-sized hit, eventually pulling in just under $18 million against the $1.5 million budget. Parts of the film read as a love letter to classic horror fans, with a number of cameos from classic actors and genre stalwarts, including John Carradine, Dick Miller, and Famous Monsters of Filmland publisher Forrest J. Ackerman. Much of the attention for the film focused on the dynamite transformation scene; while menacing Karen White (Dee Wallace), Eddie Quist (Robert Picardo) changes into a massive bipedal werewolf. Based on the reaction to that scene, Bottin was launched into a stellar effects career; his next two films with director John Carpenter, The Fog and The Thing, cemented him as a Hollywood heavyweight.

The trailer for Wolfen (Uploaded to YouTube by Warner Bros.)

Next was Wolfen, which opened in July. The Warner Brothers release didn’t perform as well financially, as it had the misfortune of opening in the wake of a number of huge hits; Raiders of the Lost Ark, Cannonball Run, Superman II, Escape from New York, Bond vehicle For Your Eyes Only, Stripes, Arthur and a re-release of Star Wars were all still in theaters. It fared better with the critics. Roger Ebert in particular gave it 3.5 stars out of 4, writing that it was “an uncommonly intelligent treatment of a theme that is usually just exploited” and “a provoking speculation on the terms by which we share this earth with other creatures.” Ebert also noted it wasn’t properly a werewolf movie, but existed more alongside the genre. The most notable effect deployed in the film was a series of clever POV shots for the Wolfen that look like infrared or thermal imagery. Later films would pick up this technique to show supernatural or alien threats tracking their prey.

Secrets Behind the Iconic Transformation: An American Werewolf in London Bonus Feature Spotlight (Uploaded to YouTube by Universal Pictures All-Access)

When An American Werewolf in London arrived in August, it exploded. Critical acclaim and popular interest made the film a big hit. The mix of humor and horror lured people in, but Rick Baker’s outstanding work captured both attention and imagination. Like The Howling, American Werewolf features a show-stopping transformation sequence. The film also portrays a number of undead characters in progressive decay (these characters continually appear to haunt the titular werewolf, played by David Naughton). The film directly resulted in the MPAA adding a Best Makeup category to the Oscars, which Baker won.

American Werewolf had an additional, unintended side effect on pop culture. Michael Jackson approached Landis about directing a video for his song “Thriller” after seeing the film. Landis, with Baker in tow, did the video in 1983. Not only did Jackson’s albums go back to the top of the charts, but the video also became a worldwide phenomenon, driving up viewership for MTV and Showtime (who also had a deal to show the video and its “Making Of” companion), and becoming the first VHS tape to sell over a million copies.

With three critically well-received werewolf films in one year, two of which were very financially successful, Hollywood . . . sort of did nothing. A well-made British anthology film based on the work of Angela Carter and directed by Neil Jordan in 1984, The Company of Wolves, was critically well-received, but didn’t make much of a financial impact. Silver Bullet, based on Stephen King’s Cycle of the Werewolf, did okay business on mixed reviews. But the fate that befell the original Universal Monsters landed on lycanthropes four short years later: the movies decided to play them for laughs. After the Michael J. Fox-led Teen Wolf made $80 million on a $1.2 million budget in 1985, the rest of the decade’s films that featured werewolves were either straight-up comedies (like Transylvania 6-5000) or hybrid horror-comedies (like Waxwork). For the rest of the decade, horror audiences largely flocked to slasher flicks or other supernatural horrors.

The werewolf has never really gone away. You can find films popping up from time to time or see the character type appearing alongside other monsters in the likes of the Underworld and Twilight franchises. Rumor has it that Marvel Comics’ own Werewolf by Night will be popping up in the Marvel Cinematic Universe in the near future (Moon Knight, soon to get his own Disney+ series, made his first appearance in that character’s comic). But for whatever reason, the shapeshifter has been largely supplanted by vampires, zombies, and others. It could be that we’re just scared of different things now. Yet, in 1981, for one wild year, werewolves owned the movies. Maybe you should never count any monster out. For all we know, it might just be one more bad moon away.