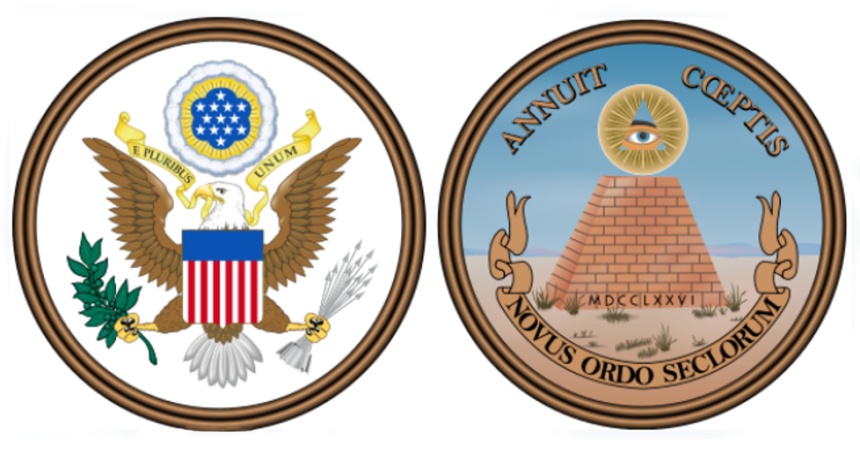 After the Declaration of Independence was signed, Congress asked Benjamin Franklin, John Adams, and Thomas Jefferson to design an official seal for the new nation.

As former subjects of the crown, they were all familiar with Great Britain’s Great Seal of the Realm, the king’s official stamp of approval on state documents. The Great Seal of the United States would serve a similar purpose, giving official acknowledgement of government functions.

But United States didn’t have Britain’s 700 years of development, which had produced an image of a shield representing the British commonwealth, between a lion representing England and a unicorn for Scotland. Revolutionary America had no ancient, traditional symbols to be incorporated. So Franklin, Adams, and Jefferson were starting with a blank page.

Adams produced a cautionary image of Hercules confronting two roads, leading to either virtue or self-indulgence.

Jefferson’s design represented the new nation finding its way with divine guidance. It showed the Israelites being led through the wilderness by a cloud and pillar of fire.

Franklin emphasized the inevitable victory of democracy by showing the Red Sea destroying the Pharaoh’s army, accompanied with the motto “Rebellion to tyrants is obedience to God.”

The committee of three chose Franklin’s design for one side and asked a Philadelphia artist and heraldry expert Pierre Eugene du Simitiere for help on the other. Du Simitiere produced something like an American coat of arms.

His shield in the center of the image bears symbols for England, Scotland, Ireland, Holland, France, and Germany — all the nations from which Americans had come. These are surrounded by shields representing the 13 colonies. To the right is the Goddess of Liberty. To the left is the Goddess of Justice.

Du Simitiere wanted to emphasize the united effort of the new nation. He took the motto from the cover of The Gentleman’s Journal; Or the Monthly Miscellany. “E Pluribus Unum” appeared above a hand holding a bouquet of flowers, including a lily and rose among cowslip and daisies. It meant that in the gathering of many articles for the magazine, there were some common items, but there would be one piece everyone would like.

For du Simitiere, though, the phrase meant one nation emerging from the 13 colonies, with the people were immigrants from six countries.

He also introduced the Eye of Providence surrounded by rays of divine light, representing the eye of God watching over the nation. To make the reference clear, a motto was later added: “Annuit Coeptis,” meaning “God favors our undertaking.”

The eye of God was an ancient symbol dating back to ancient Egypt, where the eye of the god Horus represented well-being and protection.

The seal’s final design was delayed for several years; the attention of Congress was fixed on the War of Independence. But in 1782, as the United States finalized a peace treaty with Great Britain, there was an urgent need for a seal that would make America’s agreement official.

The final design was a joint effort between the Secretary of the Continental Congress, Charles Thomson, and a legal scholar with a knowledge of heraldry, William Barton.

Thomson made the greater contribution to the front, or obverse, of the seal. It showed an eagle, representing American sovereignty. Its appearance was something of an official acknowledgement of its status as a national symbol.

Instead of using an eagle in profile, as on coats of arms, its wings are outspread to connote power and readiness.

It holds numerous references to the 13 colonies. In the eagle’s left talon is a clutch of 13 arrows to symbolize the power to make war. In its right talon it holds an olive branch (13 leaves, 13 olives) representing the readiness to make peace. The eagle’s head is always turned to the right. It is protected by a shield of 13 alternating red and white stripes.

Above its head is a constellation of 13 stars and in its bill, du Semetiere’s “E Pluribus Unum.”

The reverse side shows the Eye of Providence and a pyramid of 13 levels. At its foundation is the date 1776. Like the enduring pyramids of Egypt, the American pyramid was meant to signify strength and endurance. Beneath it are the words “Novus Ordo Seclorum”— a new order of the ages. Or, as Charles Thomson put it, “the new American era.”

The pyramid is unfinished, representing the unending work of creating and sustaining the new nation.

Today, the Great Seal is used on official documents to authenticate the President’s signature. It is placed on treaties, commissions, proclamations, and warrants. It is reproduced on the doors of embassies and consulates as well the buttons of military uniforms.

The American flag has become the dominant symbol of the United States. But the Great Seal shouldn’t be overlooked. Taken altogether, it symbolizes a nation of united people, ready for war, looking for peace, whose construction is never complete.