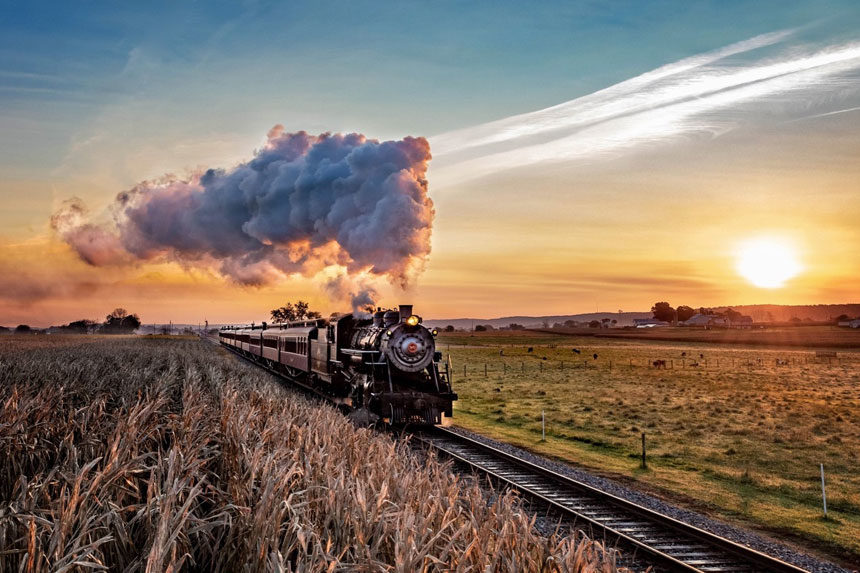 The Strasburg Rail Road is one of the nation’s top destinations for passengers wishing to catch a ride behind a steam train. It’s given thousands of eager riders the chance to see how American railroads operated during their glory days.

Best of all, it’s not the only place where you can trundle down the tracks on steam power. Several railroad organizations offer steam engine excursions – and they’re waiting for you to climb aboard this summer.

When railroads started retiring steam locomotives in the mid-20th century, some wound up in city parks. But decades later, the one in Abilene, Kansas, got back on track. The Abilene & Smoky Valley Railroad operates former Atchison, Topeka & Santa Fe No. 3415, a 4-6-2 (those numbers representing the wheel arrangement) Pacific-type locomotive that pulls passenger excursions on select weekends throughout the year.

The locomotive was restored to service after sitting in a municipal park for 40 years. It’s worked for the railroad for several years and is about to undergo significant rebuilding, so 2022 will be the last chance to roll down the rails behind this engine – at least for a while. Repair work on the locomotive will coincide with continued track rehabilitation work, ensuring smooth rides for years to come.

No. 3415 operated over Memorial Day weekend and drew a large crowd, says Ross Boelling, the railroad’s president and general manager. “There’s only very few Pacifics left,” Boelling says. “It’s the only steam locomotive within a 500-mile radius of Abilene that’s operating. … She always seems to draw a lot of attention.”

The engine will operate during Fourth of July weekend, Labor Day weekend, and during Abilene’s annual heritage celebration in late September and early October. Round-trips on the line last roughly two hours. Tickets for adults ages 12 and over are $40; children ages 3 to 11 can ride for $20, and children ages 3 and under ride for free. For more information, visit asvrr.org.

The Cumbres & Toltec Scenic Railroad is planning to fire up its summer season of steam train rides July 1, railroad officials say. The 64-mile railroad operates between Antonito, Colorado, and Chama, New Mexico, carrying passengers through tunnels, over streams, past wildlife habitats and across a lengthy, vintage trestle bridge. It also climbs to the top of Cumbres Pass. At more than 10,000 feet, it’s the highest point of elevation a steam locomotive has ever reached in North America. The railroad holds the claim to the largest fleet of narrow-gauge steam locomotives in the U.S.

The railroad has introduced new special trains for the summer season, including dinner and brunch trains powered by steam locomotive No. 168. Ticket prices for regular, full steam excursion train trips start at $135 for adults. The railroad offers shorter trips at lower costs, and tickets are selling out quickly. To purchase tickets, visit cumbrestoltec.com.

“If there was ever a year to book early, this is it,” says Scott Gibbs, the railroad’s president. “Our fans are excited to get back to rail adventures and early sales are strong. We’d hate for anyone to be disappointed, so plan ahead.”

Not many registered historical sites move by rail. But the Durango & Silverton Narrow Gauge Railroad in Durango, Colorado, does. Winding through the San Juan National Forest, this railroad has been voted as one of the world’s best train rides, according to the American Travel Writers Association.

The railroad can track its history back to the narrow-gauge Denver & Rio Grande Western Railway in the early 1880s. The line between Durango and Silverton was nearly abandoned in the 1940s, but it found a new life serving as a movie set. It’s been featured in several productions, including Around the World in 80 Days, and it’s been a registered National Historic Landmark since the 1960s, according to the railroad’s website.

The railroad provides year-round passenger service behind its steam engines, which date back to the early 1920s. Tickets for the Durango to Silverton round-trip start at $101 for adults and $65 for children ages 4 to 11. Tickets can be purchased by visiting durangotrain.com.

The Grand Canyon Railway offers steam locomotive-powered rides around one of America’s most impressive land formations. The 65-mile trip, billed as a “legendary journey to an extraordinary place,” travels from the depot in Williams, Arizona, to the South Rim of the canyon. A round-trip lasts more than four hours.

The railroad offers several different classes of service, including Pullman class, coach class, first-class, and luxury parlor class. In luxury parlor class, passengers can “ride like a baron,” according to the railroad; this class offers a private bar, snacks, and an open platform on the rear of the car where riders can stand and “see the landscape from a different and unique perspective.” Along the way are Ponderosa pine, spruce, and fir trees, as well as mountain lions, elk, and bald eagles. The train ride includes live musical entertainment, according to the railroad’s website, and passengers can read the railway’s newspaper, the Territorial Times.

Upcoming steam engine excursion dates are July 2, Aug. 6, Sept. 3, Sept. 17 for the railway’s anniversary, and Oct. 1. Tickets for children ages 2 to 15 start at $32, and tickets for adults ages 16 and older start at $67. Children under 2 ride for free. For more information, visit thetrain.com.

As the world’s first mountain-climbing railway, this Mount Washington, New Hampshire, attraction takes visitors high in the sky behind coal-fired steam locomotives. Riding more than 6,000 feet to the top of the mountain, visitors can see much of the American northeast from the comfort of their seats in the train car – on a clear day, of course.

Robert Arey, the railroad’s director of marketing, says, “Mount Washington is the highest peak in the northeast, so you do get up high in elevation. It’s also home to the world’s worst weather. Some days, you might get to experience being in a cloud … or you might get views of five different states, including Canada, and also the Atlantic Ocean if those conditions are right. It gets you a whole new way to experience the summit of a mountain.”

To climb the mountain, the railroad’s two operating steam locomotives use a rack system, which operates like a bicycle chain, Arey says. The locomotive powers a cog gear that hooks into the rack, pulling the engine and passenger car up the mountain as the wheels glide along the rails.

Round-trips last three hours: two hours for travel up and down the mountain, and one hour for visitors to explore the summit. The railway normally offers a morning trip and evening trip, and this year, it’s added a third trip on Saturdays because of high demand, Arey says. Steam train rides sell out quickly, and tickets cost roughly $100 per person. To purchase tickets and look at train schedules, visit thecog.com.

If you’ve ever watched Willie Nelson’s 1988 TV film Once Upon a Texas Train, then you’ve seen the Nevada Northern Railway in action. The Nevada Northern calls itself “the best preserved, most authentic, American short-line railroad in existence.” In Ely, Nevada, about 250 miles north of Las Vegas, this railroad offers 90-minute rides behind steam engines built in the early 1900s. Along the line, passengers can see vintage mining structures, a ghost town,tunnels, and mountain scenery. Some trains may even get “robbed” by the museum’s actors. The railroad even has a mascot: Dirt the Cat, who reached social media celebrity status for his dirty, furry appearance while hanging around the repair shop.

Passenger trains have been a mainstay in the railroad’s roughly 110-year history, so it’s no surprise that the museum’s steam locomotives have been featured in countless films and other productions. Hands-on events allow train enthusiasts to try their hand at operating the locomotives and other equipment.

Tickets cost $35 for adults, $29 for seniors 65 and older, and $10 for children ages 4 through 12. Children under 4 ride for free, and all children ride free Monday through Thursday each week. To purchase tickets and learn more, visit nnry.com.

Though no formal birthday celebrations have taken place, the railroad’s 190th summer promises to steamy and full of fun, says Hope Graby, the railroad’s marketing representative. Ticket prices for regular accommodations onboard trains start at $10 for children ages 2 to 11 and $18 for adults. More ticketing information is available online at strasburgrailroad.com.

The railroad has continued to add new events, including tours of its mechanical shop and opportunities for visitors to run steam locomotives, Graby says. As for the railroad’s next 190 years, it’s full steam ahead.

“The future for Strasburg is really leveraging opportunities to put steam railroading, the importance of it, the impact it has had on our country, in front of new audiences,” Graby says. “Unlike some tourist railroads, we’re a real, working railroad. You don’t have people who are playing parts or actors. You have real conductors, real firemen, real engineers, real mechanics that are doing this day in, day out with extreme love and passion for what they do.”