Photograph by Lewis Hein of underage and shoeless workers in a cotton mill, 1911. (Wikimedia Commons)

They weren’t trying to change the world.  Joseph Nicéphore Niépce, Louis Daguerre, Henry Fox Talbot, and John Herschel — the handful of men who invented photography — only wanted to capture images from light reflected on a solid surface.

But within a few years, their experimenting turned into a social force that was embraced by the public. Other technology influences — the telephone, the automobile, the internet — took decades before they were in use everywhere. But photography enjoyed nearly instant acceptance. Louise Daguerre introduced his daguerreotype process of photography in 1839.

Within a decade, almost every city in America had a daguerreotype studio, and travelling photographers in their darkroom-wagons were photographing settlers and Native Americans on the frontier. And, just a few years later, photography was shaping the destiny of the American people. Here are five of photography’s unintended consequences.

One of the earliest unintended effects of photography was its influence on elections.

In February of 1860, presidential hopeful Abraham Lincoln was scheduled to deliver a speech at the Cooper Union. Before he did, though, he visited Mathew Brady’s studio to have his picture taken. Up until then, Lincoln had been portrayed as a crude, ignorant backwoodsman from Illinois. Brady posed the beardless Lincoln on his feet, his hand lightly resting on a book, his expression thoughtful and commanding. His hair was combed — which wasn’t usually the case in later photos — and his shirt collar pulled up to hide Lincoln’s long neck.

Shortly after Brady took the photo, an engraving of the image appeared in Harper’s Weekly magazine, which contained the text of Lincoln’s speech condemning the spread of slavery.

According to witnesses, Lincoln later said “Brady and the Cooper Union speech made me President.”

Today, we know that a candidate’s public image is essential to their success. But can that public image be little more than the candidate’s face? In a 2003 study, subjects were asked to choose the outcome of several elections for the House of Representatives based only the candidates’ photographs. They chose the successful candidate 73 percent of the time.

For generations, war was presented as a noble, romantic venture in which young men proved their courage and gained lasting fame. During the Civil War, photographers like Mathew Brady, Alexander Gardner, and Timothy O’Sullivan travelled to the battlefields and captured the reality.

By now, photographs were accepted as the image of unarguable reality, and the bloated corpses shown scattered in ditches and fields after battles were convincing proof of war’s true nature. The New York Times wrote, “Mr. Brady has done something to bring home to us the terrible reality and earnestness of war. If he has not brought bodies and laid them in our dooryards and along the streets, he has done something like it.”

Reformers in the coming decades learned that photographs had a power greater than written or spoken words to strike the conscience of an audience. It led Lewis Hine, in the 1900s, to show America what child labor really meant. He presented photographs of grimy, underfed children working in mines, in fields, and on city streets. His photos brought the world of these children into respectable homes and stirred a movement that ultimately led to laws banning child labor.

In the 1880s, Jacob Riis photographed the poorest, most disadvantaged element of New York. Popular literature had given Americans a romantic idea of their impoverished countrymen. Riis’s photographs, appearing in popular magazines, showed the true conditions of the poor, and the unimaginable squalor of their lives.

The comfortable half of the people didn’t know how the other half lives, Riis wrote, saying they didn’t know because they didn’t care. Riis’s photographs prodded the upper half to see the distress and unrest in the poor and now, he said, “it had its hands full answering for its old ignorance.”

Before photography, painters were appreciated for their ability to truthfully reproduce reality. Artists like Thomas Eakins, Jean-François Millet, Rosa Bonheur, and Gustave Courbet developed rare skills in capturing honest, lifelike figures in natural light and surroundings: doing, in other words, what anyone with a camera could do.

The demand for realistic paintings didn’t disappear, but artists began to reappraise what they could offer. They looked beyond realism to capture their own responses to their subjects. This led to the school of impressionism, then expressionism, surrealism, cubism, and ultimately abstract painting, giving artists an ever-widening scope for their creativity. And while photography has only increased its influence with the development of video, our world is enriched by abstract art, illustration, and graphic design. 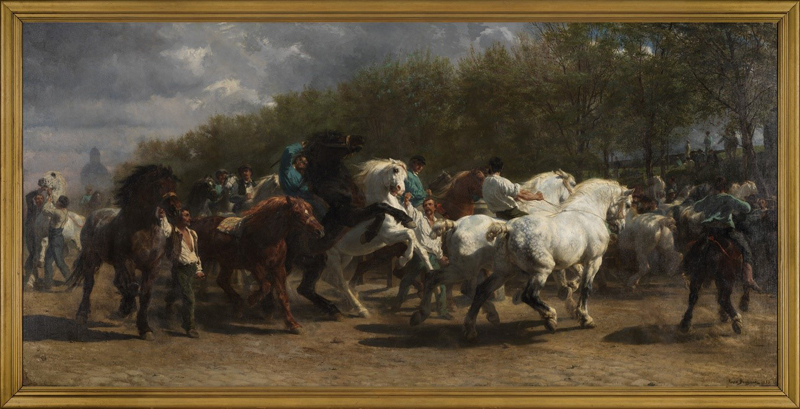 Before photography, people had a pretty good idea of how they appeared. They looked just like the reflection they saw in the mirror.

But when they were photographed, they saw a different face, one that wasn’t inverted, one that showed the part in their hair on the other side of their head. On this face, the irregularity in features they’d become accustomed to seeing on the left side of their face was now on their right. And the picture showed their face without the movements they made before a mirror they made to make themselves more attractive.

The photograph could be a harsh judge.

People naturally compare their photograph with the photos of more attractive people, and imitate what seems to works for others. Or they comply with a photographer’s suggestions of what attitude or expression makes them look best. Often, this is this appearance they tend to adopt in public.

Even the possibility of being photographed can change people’s expression. A Post editorial from August 30, 1902, observed that men have been known to sit up and assume their most photogenic look when a stranger sitting across from him in a railway car pulls out a square lunch box that the traveler assumes is a camera. He might move into a better light and hold out his chin a little higher. “We are all modest, but we are ready.”

5. Photography Gave Us an Appreciation of Time

The big events of life usually pass too slowly for us to observe. But photographs freeze the instants of change so we can see our child getting older by degrees, or our parents gradually aging across the years.  And we can piece together a year from a thousand photographed memories of events our memories consider too minor to keep handy.

We take this power of capturing time for granted, but it simply didn’t exist prior to photography. Nor did the ability to record the details of life that traditional histories overlook, details that give a richer sense of what it was like to live in a distant year.

A Post editorial in 1902 noted that Americans and their cameras were “providing the strongest and most vital historical material for those who, many generations hence, are to write of the conditions and happenings of the opening years of the twentieth century.” We have the written histories of those years, but they rarely evoke the times as a snapshot of a family at a train station, or a couple at a crowded beach.

When we see old photographs from a distant year, we see what our predecessors saw. We get a richer sense of their daily lives, the objects of their households — the horsehair chair, the beloved dog up on the couch, the large woman’s hat hanging in the hallway — all that things they valued. Every generation has its own history, but photographs make modern generations’ histories richer.