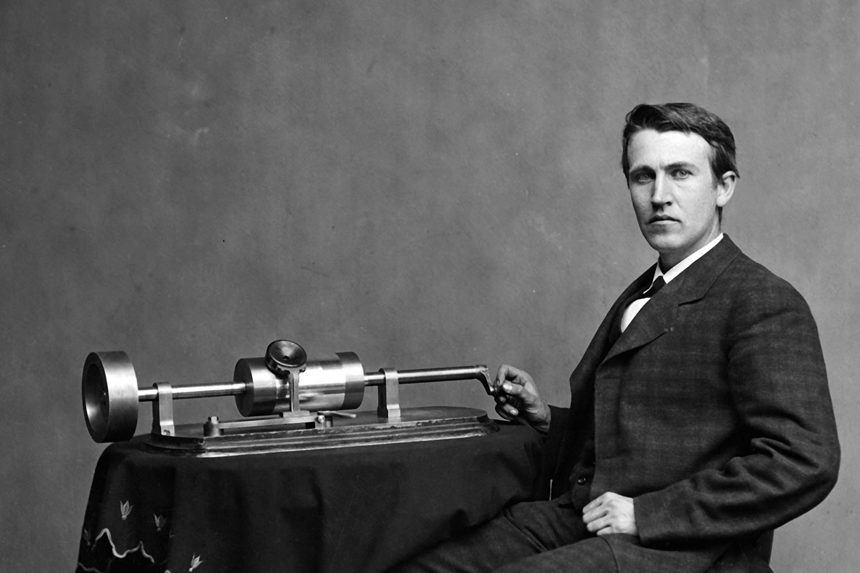 Now hear this: Thomas Edison and his cylinder-type phonograph invention. It would take another inventor, Emil Berliner, to develop the first recorded discs. (Library of Congress)

After decades of living in our homes as part of the furniture, the black vinyl LP had all but vanished by the late ’90s. A few dedicated collectors hoarded them in wooden crates stacked in their basements, occasionally pulling out cardboard Beatles or Marvin Gaye sleeves to remember when music was something to hold carefully in both hands.

Back then, the record seemed at the end of a 100-year run — a story that began with Thomas Edison, accelerated with the work of a CBS TV and radio executive in the ’40s, and then peaked as sales turned musicians like the Eagles and Michael Jackson into unprecedentedly rich pop stars. Along the way, gramophones and phonographs evolved from wooden Victorian cases topped with awkward metallic horns to the flat boxes of spinning platforms and mechanical tone arms that occupied dorm rooms everywhere.

When I received my first record, The Who’s Meaty Beaty Big and Bouncy, as a bar mitzvah gift from my middle-school friend Scott in 1982, I had no idea Edison had started the phonograph revolution in 1877. And I had never heard of Charles Cros, a French poet who came up with the same idea earlier that same year. Cros had studied the work of 1850s French inventor Léon Scott, who figured out how to imprint sound-wave patterns onto a type of carbon paper. Both Cros and Edison turned this process around, playing the sound vibrations back so people could listen to them over and over.

Edison’s approach, at first, was to imprint those sound waves onto an unwieldly cylinder draped with tinfoil and attached to a screw. His early phonographs were clumsy and difficult to use, but they got the job done — a band could play into 12 recording machines simultaneously, then repeat its song 10 times in a row, laboriously creating 120 wax-cylinder recordings. Even with these limitations, record companies such as Columbia and the New Jersey Phonograph Company began to take advantage by selling John Philip Sousa band productions and Mark Twain spoken-word passages to the public.

Soon, a German immigrant, Emil Berliner, came to the U.S. and studied Cros’ early papers. Berliner’s innovation was to change the recorded-music format from cylinder to zinc disc. Eventually, he added shellac to the mix and distributed the discs along with a player he called the gramophone. Edison would play catch-up, putting out “diamond discs” of his own through the ’20s, but he abandoned the project to concentrate on radio.

The Great Depression briefly destroyed this market, but jukeboxes in the ’30s brought it back through a cheaper 10-inch disc format that played at 78 revolutions per minute, and through sleeker, more compact players such as the $16.50 Duo Jr. turntable.

Peter Goldmark, a Hungarian engineer known for his innovations in color television, had immigrated to the U.S. in the ’30s and taken a job at CBS. He hated records because, as he wrote in his memoir, they provided “the most appalling sounds to emanate out of any machine — tinniness, scratchiness, and clicks — all mingling with the music and adding up to one discordant mess.” After visiting record factories, he came up with a killer idea: CBS would make discs out of a relatively new compound, Vinylite, which was more expensive to produce, but he predicted additional sales would make up for it.

RCA countered Goldmark’s idea with a smaller, cheaper alternative that could hold only four minutes of music on each side — the 45 rpm disc, eventually known to all as “the single.” These formats would dominate music over the next 50 years, with artists from Chuck Berry to Sam the Sham and the Pharaohs putting out singles for jukeboxes and teeny-bopper record players, while LP masterpieces such as Frank Sinatra Sings for Only the Lonely in the late ’50s set the stage for the Beatles’ Sgt. Pepper’s Lonely Hearts Club Band and Stevie Wonder’s Innervisions.

“The album had the artwork. It had the large dimension, where you could look, touch, feel, and smell everything about the record and the music,” recalls James Caparro, former CEO of Island Def Jam Recordings, who sold vinyl for years in its heyday.

For decades, record companies maintained a massive LP infrastructure — factories, warehouses, trucks, stores. When CDs made LPs obsolete in the late ’80s, many of these disappeared or transformed into something else; when MP3s and online music piracy threatened to destroy the record business in the late ’90s, vinyl extinction seemed certain.

Then a strange thing happened. Beginning in 2007, LPs roared back, selling nearly 1 million copies, according to Nielsen Music, mostly due to college students who liked hanging record sleeves on their dorm-room walls. Last year, sales were 14.3 million. That’s an increase of 1,344 percent. It’s not enough to shift the record business away from Spotify, YouTube, and streaming, but it may just extend the legacies of Emil Berliner, Charles Cros, Peter Goldmark, and, yes, Thomas Edison by a few more years.

Before the invention of the phonograph, if you wanted to hear a song, you had two options — find someone to sing it or sing it yourself. That all changed in 1877 when Edison unveiled his “incredible talking machine,” making it possible to listen to the music you want, whenever you want. Throughout the 20th century, the Post reported on the inventors who shaped its future and how the invention shaped ours.

Sound is least understood of all the things which have baffled the brains of science. But inventive genius has at last stumbled upon a clue, which promises to lead to the solution of the mystery of sound. The clue is the talking machine.

Emil Berliner, the telephone inventor, cleared the way for achievement about 12 years ago when he produced a queer contrivance, which he called the “gramophone,” that possessed the remarkable power of receiving sounds and repeating them again at the will of the operator. A lively imagination could even fancy that it recognized in the gramophone record the particular voice which had made the sounds.

Berliner had started in the right direction by evolving the theory that the right way to make a talking-machine record was on a flat disk instead of on a cylinder, because the stylus which writes the sound waves can only move up and down, or in and out of a cylinder. On the other hand, a stylus which has only to swing from side to side has perfectly free play and is thus able to record all shades of all tones with equal facility.

When a sound wave is poured through the receiving horn against the cushion of air, the diaphragm and the stylus attached to it are caused to vibrate in exact accord with the wave. The vibrations of the stylus are traced upon a plastic disk which revolves at a fixed speed in contact with its point, making an irregular spiral line. When the disk is filled with this spiral record, it is called a “master record.” It is hardened by a secret process, after which endless copies may be taken from it by another secret process. When one of these copies is placed in a talking machine and the stylus is caused to retrace the spirals, it vibrates exactly the same number of times per second as it did in making the lines … repeating the sounds which were poured into the horn.

Other details were worked out until the talking machine was considered worthy to make its public debut as the Victor Talking Machine, under the auspices of the Victor Talking Machine Company. It might reasonably be supposed that the talking machine would be accompanied by a somewhat spectacular commercial success. But it does rather stagger one to learn that, starting practically
at zero four years ago, the sales of Victor goods throughout the world have already reached the amazing total of
$12 million a year. So great is the demand, in fact, that
the 1,000 employees housed in three buildings find difficulty in supplying it.

Neither Alexander Graham Bell nor Thomas A. Edison could foresee the 50 different kinds of record collectors who are the most picturesque proof of the way Americans have recently taken to the music that goes round and round
on a platter.

Any kind of collector is usually a mystery to the outsider, to whom the accumulation of stamps, ivory elephants, old dental tools, or hourglasses is necessarily pointless. But
the record collector does make a good deal of sense to
the uninitiated because he actually plays as well as loves
his records.

The record craze is so vigorous that newspapers are giving away records and turntables as subscription bait. Record shops are choked with cash customers while the management tears its hair over the problem of getting one client out of the listening booth in time to make room for all the thronging others, each of whom is a potential special-taste collector.

Many collectors spend their vacations touring hither and yon by car and inquiring in small towns for stray stacks of half-forgotten disks. Since grubbing through basements and haylofts is dirty work, the more earnest types do their campaigning in overalls and wearing furnace gloves.

Sam Goody runs the world’s largest record store — without salesmen. Sometimes customers have to stand in line for an hour to get inside the place. Sam Goody’s customers — an average of 4,000 a day visit the store, while additional thousands order by mail — include royal households, ambassadors and diplomats, the Armed Forces at home and abroad, entertainment stars, audiophiles, professional musicians, glassy-eyed collectors, and just plain people who want to buy a record or two. Last year, music lovers accounted for a Sam Goody gross of close to $4 million. Bargain prices and the customer’s assurance of finding what he wants surely helped Sam Goody to run far ahead of the retailing pack, but there is more to the story than that. There has been a trend. The direction and force of this trend are to be found in two figures. In 1950, there were $185 million worth of records, of all types, sold in this country. In 1955, the public’s bill for records was $220 million. Someone has pointed out that we now pay more for records than we pay
to watch baseball.

This article appears in the July/August 2018 issue of The Saturday Evening Post. 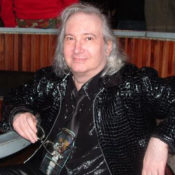