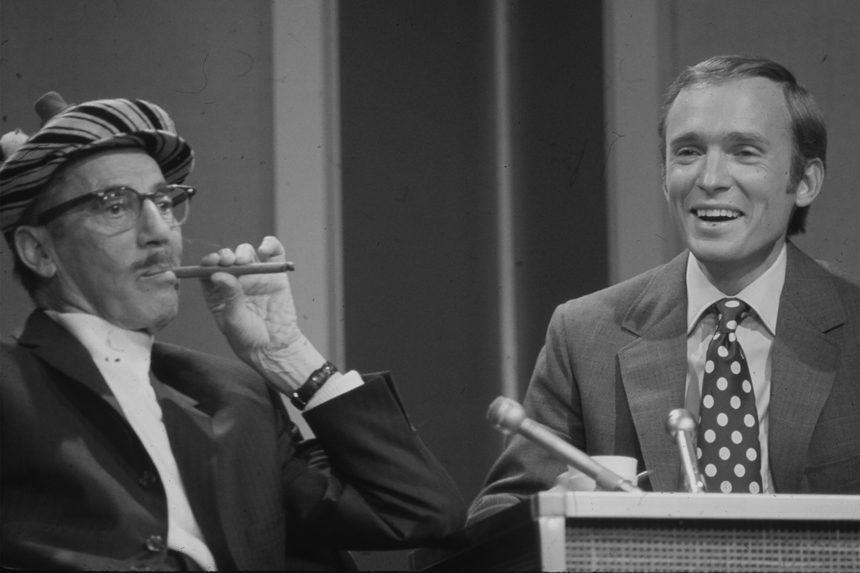 Dick Cavett met Groucho Marx in 1961 at, of all places, a funeral. Cavett was a 25-year-old staff writer for the Jack Paar-hosted Tonight Show and a fledgling stand-up comedian. Groucho, in his 70s, was a comedy legend. When Cavett got his own talk show, his comedy idol was a guest seven times.

But theirs was more than a show business friendship. They exchanged letters and frequented movies and plays. Groucho gave Cavett encouragement and advice regarding his stand-up career. In 1972, when Groucho, at the age of 81, performed at Carnegie Hall, an unbilled Cavett served as the evening’s host.

Cavett reflects on their almost two-decades bond in Groucho & Cavett, a presentation of the Emmy and Peabody Award-winning PBS series, American Masters. The lively documentary premieres nationwide on Dec. 27.

Groucho & Cavett is the follow-up to the award-winning documentary, Ali & Cavett: The Tale of the Tapes. Both were directed by Robert S. Bader, himself a devout Marxist (of the Groucho variety). He wrote Four of the Three Musketeers, the definitive history of the Marx Brothers’ vaudeville career. As manager of The Dick Cavett Show archives, he has shepherded several compilations of Cavett’s essential interviews with a who’s who of politics, entertainment, books, and culture. He calls this film “a dream come true.”

For Cavett, the dream of knowing Groucho “just got better and better,” he says. Not only did he get a chance to meet and become friends with him, but he also helped to introduce a new generation to the peerless comedian and wit, at a tumultuous time in the 1970s when college students discovered a kinship with the Marx Brothers’ anarchic comedy.

Cavett, 86, spoke with The Saturday Evening Post about the documentary and his cherished friendship with the one, the only, Groucho, which he calls, “The greatest thing that happened to me in my career.”

The Saturday Evening Post: Your friendship with Groucho has a wonderful, albeit off-center origin story. You met at a funeral.

Dick Cavett: I read in the paper that George S. Kaufman died. I’d been a great fan. I remembered him from an early game show and then I found out he was a great playwright [He co-wrote The Man Who Came to Dinner and three Marx Brothers vehicles: Animal Crackers,  The Cocoanuts, and A Night at the Opera]. You could safely say he was Groucho’s god.

I went to the funeral, which was across the street from where I lived in New York. The place was filled to overflowing; they had to find extra rooms to put people in. Every face was recognizable from [caricaturist] Al Hirschfeld cartoons. Groucho was there. I figured I would speak a few words to him and I’d remember it the rest of my life. At one point, I heard a woman’s voice say, “Hi Groucho, I’m [author] Edna Ferber,” and I thought, “Dickie, you’re not in Nebraska anymore.”

It was a beautiful day. He was walking toward Fifth Avenue on 81st Street. He had been with Art Carney on one side and [Broadway writer and director] Abe Burrows on the other. Groucho admired Abe Burrows’ line, “How ya gonna keep ’em down on the farm after they’ve seen the farm.” That’s Groucho-esque.

SEP: So you’re living your dream.

DC: It became better and better. We chatted awhile and he said, “You seem like a nice young man and I’d like you to have lunch with me.” As we traveled down Fifth Avenue, Groucho managed to insult every doorman along the way. He was always inspired by whomever he ran into.

SEP: In the documentary, you talk about how he encouraged you at the beginning of your stand-up career.

DC: He was a kind of advisor. He wrote to me, “I saw you on The Merv Griffin Show and I think you are on a motherlode; the idea of a guy from Nebraska, an ill-at-ease hayseed from the Midwest, on the Yale campus, is a wonderful premise to build jokes on.”

SEP: What a thrill that must have been.

DC: I received a letter after he died from his daughter, Miriam. She said, “My father thought the world of you.” Speaking of letters, I found one of several that I got from Groucho. There was a P.S. that read, “Have you ever noticed that Peter O’Toole has a double phallic name?”

SEP: Was Groucho always on when you were out together?

DC: He was, but it was not oppressive in any way. He was so well-informed. He knew politics, he knew literature. The thing about Groucho that is not always mentioned is that his greatest desire was not to be a performer, but a writer. If you look in The New Yorker archives, there are funny stories in the earliest issues by Julius Marx [his birth name].

SEP: Do you have a favorite memory of Groucho being Groucho in public?

DC:  The most memorable for me was when a couple recognized him and the man said, “Hey, Groucho, say something insulting to my wife.” Groucho said, “With a wife like that, you should be able to think of your own insults.” They laughed, of course.

SEP: Let’s go back. How did you discover Groucho?

DC: He first came to my attention growing up. I saw him on the game show You Bet Your Life and then in the movies with his brothers. My father remembered when their first movie, The Cocoanuts, came to Grand Island, Nebraska. He said it may be the only time in his life that he saw people slide out of their chairs laughing.

SEP: You’ve interviewed so many of the greatest comedians, such as Jack Benny and Bob Hope. What about Groucho so resonated with you?

DC: I was a great worshipper of Bob Hope and Benny and other great comics, but there was something about the gifts that Groucho had that surpassed everybody. He moved funny, he sounded funny, he had every gift any comedian could hope to have. There’s nobody better. You could put him with any great wit you can name: Oscar Wilde, George Bernard Shaw. He’s the king.

SEP: Did you ever watch a Marx Brothers movie with Groucho?

DC: He’d call me, and we’d go to a movie or a Broadway show. We once saw a Czechoslovakian movie. At the end, everyone was very silent. A man seated next to Groucho said to him, “That was a very sad movie.” And Groucho said, “Life is sad.”

SEP: After you became friends with Groucho, did you introduce him to your other comedian friends? Woody Allen is a big Groucho fan.

DC: I finally got Groucho and Woody and myself together in a booth at Lindy’s restaurant. Woody was thrilled, of course, but afterward he said the interesting part was that here is this comedy legend, but at the same time, he seemed like one of his Jewish uncles.

SEP: What do you hope viewers get from Groucho & Cavett?

DC: I saw this show with an audience at the East Hampton Film Festival in a movie theater full of people. It was one laugh after another. It was just seemingly nonstop. If laughter is the best medicine, I urge everyone to see it.