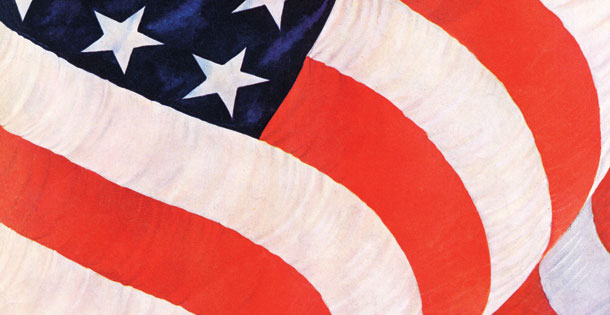 Halfway into the last century, America was finished. Or so it seemed. On October 4, 1957, the Soviet Union became the first space power in history, launching its Sputnik (“satellite”) into orbit and striking terror into the American soul.

This was “a shock which hit many people as hard as Pearl Harbor,” recalled a commentator for the Mutual Broadcasting System, then one of the Big Four networks. It was “a frightful blow.” America had grown “soft and complacent,” believing that it was “No. 1 in everything.” Yet now the country had been upstaged by its mortal rival.

Sputnik stopped transmitting after three weeks, tumbling out of the sky two months later. Short-lived as it was, the wobbly contraption–a mere 23 inches across–had a devastating impact on the American psyche. Soul-searching and self-deprecation turned into a national obsession–and into a chronic reflex. The October surprise gave birth to a school of thought that would outlive Sputnik and regularly return to torment the American imagination all the way into the 21st century. Let’s call it “Declinism.”

The basic theme–America as has-been–is recycled about every 10 years. “It’s decline time in America,” the stock drama trumpets, and it is staged anew at the end of each decade–typically, as the sun is about to set on an administration while presidential candidates begin jockeying for position. As in the hand-wringing over Sputnik, the alarm does in fact spring from real trouble, be it economic hardship or military misfortune.

Economically, this first wave of Declinism bears an uncanny resemblance to the last, which rose after the Crash of 2008. In the fall of 1957, the economy shrank by 4 percent; in the spring of 1958, by an appalling 10 percent. The numbers for 2008 and 2009 were minus 5 percent and minus 6 percent. So there is always a rational basis for this kind of angst attack. Just as regularly, though, anxiety expands into visions of foreordained decay. A crisis is not just a crisis but a portent of doom in an almost biblical model: Having gone astray, America will be called to account for the sin of pride or sloth.

As this is a secular saga, punishment will be handed down not by the deity but by other nations. Meaner and leaner, they will dethrone the “last best hope of earth,” to recall Lincoln’s famous words in the worst days of the Civil War. The Soviet Union was first in this tale of woe. It would be followed by Europe, Japan, India, and China. The characters changed, but the drama became part of the American repertoire.

In the Year of the Sputnik, a presidential panel produced a top-secret report, “Deterrence and Survival in the Nuclear Age,” which went down in history as the Gaither Report. Though focusing on the Soviet Union, the language of doom could easily be applied to China today, the most recent challenger touted as more dynamic and disciplined than the United States. The economy of the USSR, warned the panel, is just a bit “more than one-third of that of the United States,” but “it is increasing half again as fast.”

So how long would it take for the Soviet Union to demote the United States? Careening along on its straight-line projection, the report predicted that by 1980 Moscow’s annual military spending “may be double ours,” unless, of course, the United States finally woke up to the deadly threat. Today’s doomsters similarly point to the double-digit annual expansion of Chinese defense spending, and the more strident Cassandras target 2025 as the year when China will leave the United States in the dust economically. Others give the United States until 2050 to drop to second or even third place in the GDP race.

Worse, the Gaither Report claimed, the Soviets had “probably surpassed us in ICBM development”–missiles of intercontinental reach. “Probable” is another word for “don’t know,” but in the annus horribilis of 1957 the report found a grateful reader in the freshman senator from Massachusetts, John F. Kennedy. Eying a presidential run two years later, he began to stoke the national angst. For him, the day of America’s disgrace was practically at hand. By 1960, “the United States will have lost…its superiority in nuclear striking power.” The slothful policies of President Eisenhower and his Republicans would produce “great danger within the next few years,” ran his mantra.

This was the fabled “Missile Gap” that never existed; it would take years before Soviet missiles based at home could effectively hit the continental United States. Whether by number or technology, the United States was far ahead of the USSR. But facts, unfortunately, don’t deliver prophetic punch. So Kennedy painted Armageddon in the most gruesome colors.

The Russians were forging ahead, and the Missile Gap would deliver to them a “new shortcut to world domination.” In the presidential campaign, Kennedy orated like a fully blown Declinist: “That is what we have to overcome…[the sense] that the United States has reached maturity, that maybe our high noon has passed, maybe our brightest days were earlier, and that now we are going into the long, slow afternoon.”

Henry Kissinger, then a young professor at Harvard, concurred: “Only self-delusion can keep us from admitting our decline to ourselves.” He would return to this theme again and again.