Truman Capote’s only story in The Saturday Evening Post appeared 50 years ago. After the success of his true crime novel, In Cold Blood, Capote had visited Holcomb, Kansas once more for the production of the film adaptation.

His account of the gruesome murders of the Clutter family in the “high wheat plains of western Kansas” shocked the country as the story was serialized in The New Yorker in 1965. Richard Brooks directed the movie, and its adherence to authenticity was striking to the prominent author. Capote recounts meeting the actors set to portray Perry Smith and Richard Hickock, the then-executed killers he had spent years interviewing: “Meeting them, having to be around them, was not an experience I care to repeat. This has nothing to do with my reaction to them as private individuals: They both are sensitive, seriously gifted men. It’s simply that, despite the clear physical resemblance to the original pair, their photographs had not prepared me for the mesmerizing reality.” The actors, Robert Blake and Scott Wilson, were uncanny lookalikes of the Clutters’ killers, but perhaps more unsettling was the film’s obedience to real-life locations in its depiction of the events.

It was at Capote’s own insistence, as he claims in his write-up, that the film was shot, truly, on-location. The Finney County Courthouse was the site of the trial, and a Kansas convenient store where the killers had purchased tape and rope appeared in the film as well. Even the Clutter farmhouse, the scene of the quadruple murders, became a movie set. The family’s original furniture and décor was used, as Capote reports: “Yet eight years have passed, the Clutter family are gone, and Dick is dead, but the Venetian blinds still exist, still hang at the same windows. Thus reality, via an object, extends itself into art; and that is what is original and disturbing about this film: Reality and art are intertwined to the point that there is no identifiable area of demarcation.”

Capote’s book, and the subsequent film, launched the true crime genre into the American consciousness. The trailer for In Cold Blood claimed it to be “a terrifyingly true story of our generation, a generation both repelled and attracted by violence,” but the momentum of true crime since the film’s release in 1967 hints at a much more universal appeal. Helter Skelter, Summer of Sam, and Monster have followed the format for taking on real-life murderers as subjects, and — since TV is king these days — FX’s aptly-named American Crime Story tells a new chillingly true story each season. American audiences’ obsession with a narrative “based on real events” lends credence to Capote’s suspicions that “reflected reality is the essence of reality, the truer truth.” 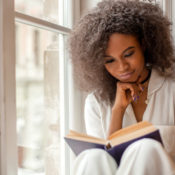