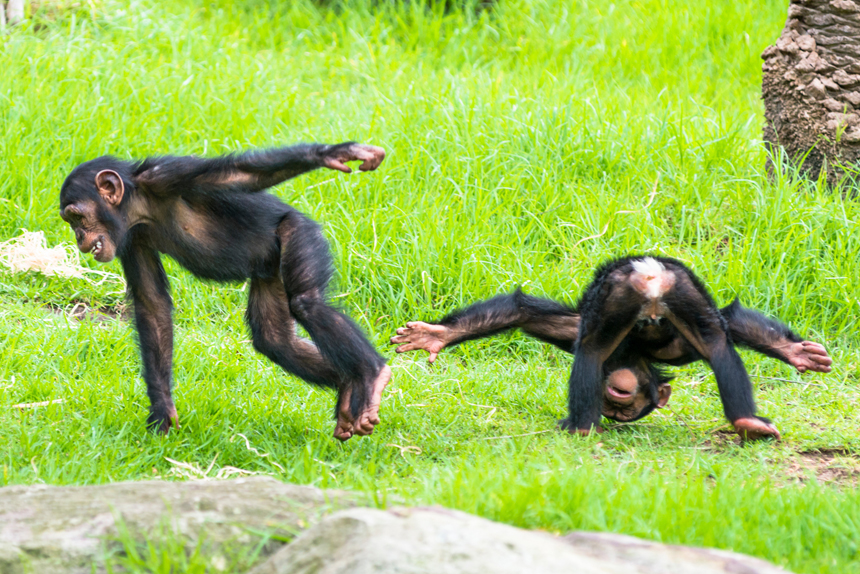 Biologists once thought animal play was utilitarian: colts and fawns kick up their heels to develop muscles, for instance. I recall old nature documentaries narrating that wolf pups are play-fighting to hone skills they’ll need to survive; what appears to be fun merely serves an evolutionary purpose. If a tiger-kitten pouncing on a bug was shown, we were assured it would make them better hunters later on. It made perfect sense; so obvious that no one bothered to fact-check.

For ages, we were loathe to grant other animals qualities akin to ours. If anyone suggested another species might have a rich social life or feel emotions, some lab-coat “expert” would peer over horn-rimmed glasses and dismiss the apostate with the tired utterance, “One mustn’t anthropomorphize.”

That’s hilarious. Humans are one primate among 8.7 million animal species worldwide. Claiming we are the sole animal with characteristics like social bonds or feelings is not only illogical; it’s the height of hypocrisy.

Assessing the function of play in animals’ lives is time-consuming. Dr. Lynda Sharpe, a researcher at Australian National University in Canberra, spent five years observing meerkats, desert-dwelling carnivores. In her May 2011 Scientific American article on animal play, she says young meerkats that fought the most did not make better adult fighters, and play-hunting did not predict real hunting success. However, she found that extra-playful meerkats were more nurturing as parents, and reared more offspring per litter.

But kids don’t play because they’re concerned about brain development — they do it because it’s enjoyable. Adults play for the same reason. It looks as though other animals are no different: gulls just wanna have fun.

Take, for example, many critters that reside here in the United States. Ravens, whose intelligence is on par with 4-year-old humans, love to goof off, both youths and adults. They are known to drop various objects from a great height and then dive to retrieve them in mid-air. When I lived in New York State’s Adirondack region, I would routinely see them fly upside-down. They seemed to show off, swooping down right in front of me to perform a series of barrel-rolls before they disappeared from view.

Bernd Heinrich, professor emeritus in the biology department at the University of Vermont, says it is commonplace to see ravens in Alaska repeatedly sliding down snowy rooftops, sometimes holding twigs in their talons as snowboards. This has been documented in Canada’s Northwest Territories and other places as well. Crows, which are closely related to ravens, have even been seen using a plastic lid for a sled.

Biologists have not found any clear utilitarian purpose for ravens to slide down steep slopes on homemade snowboards. That pretty well defines play: fun with no practical objective.

Gulls are experts at rearranging dumpster contents and stealing food from beach-goers. But just for a lark, they play games from time to time.

A study done through the College of William and Mary in Williamsburg, VA recorded groups of herring gulls playing drop-catch with found objects. Gulls actually spent more time playing with “toys” than foraging for clams. Windy days, when the game was more challenging, brought out greater numbers of drop-catchers.

Golf is not a pastime you’d associate with animals, especially tiny ones. In 2016, entomologists at Queen Mary University of London, England found that bumblebees learned within minutes how to roll a tiny ball into a little hole to get a sugar-water reward. I assume the research team is now busy with bumblebee golf tournaments.

Sure, the bees had to be taught to play golf, but so did I. An interesting sidebar is that when “untrained” bumblebees in a plain enclosure were given access to balls, they rolled them around their box. In fact, bees in a nearby enclosure that lacked toys bailed out and sought the place with the balls.

Given that bumblebees are the most efficient and essential pollinators on Earth, it would be disastrous if they start to goof off more than pollinate.

Native to Idaho, Washington, and especially Alaska, caribou have an offbeat pursuit, but only between late summer and early winter when certain mushrooms appear. The fly agaric mushroom is large, with a domed reddish cap and big white polka-dots; the mushroom of Alice in Wonderland and garden statuary. It also has psychoactive properties.

Wild caribou are known to selectively browse the fly agaric mushroom, after which they have been observed cavorting about for hours. During the time Cupid and Blitzen are blitzed (caribou are called reindeer outside North America), caribou are vulnerable to predation, yet biologists can’t explain such risky behavior. Living where it’s always cold and surviving on lichens might prompt anyone to seek a diversion, I suppose.

At last, scientifically proven: all work and no play make Jack (and Jill) dull. Golf, anyone?