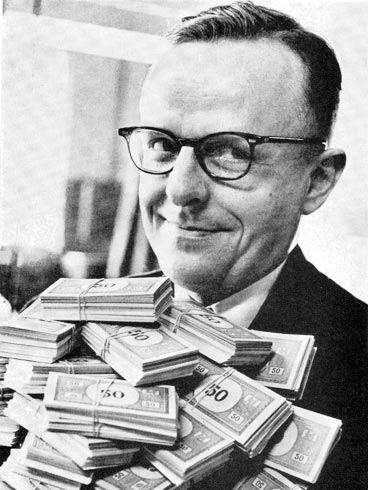 Those unfortunate people with no opportunity to buy Christmas presents for children don’t get the annual update on America’s toy industry. They aren’t aware that each Christmas, there is one Ultimate Toy — a gift every child seems to want.

You might recall Ultimate Christmas Toys from your own past — a Barbie, or Lionel train set, a Cabbage Patch Doll, Rubik’s cube, or Lego set. Today’s Ultimate Toy tends to rely on advanced electronics, a gigabyte of memory, a video screen, and it probably doesn’t sell for less than $130. It’ll be unique, clever, engrossing. It’ll also be in tune with today’s tastes in amusement, because fashions in entertainment change just as they do for clothing.

In post-war America, the fashion in toys was education. The Christmas tree was crowded with games to stretch children’s minds. They were a hit with the parents. They flopped with kids — which didn’t surprise some toy experts. The staff at New York’s F.A.O. Schwartz toy store had a theory about what made a toy successful.

Toys, they say, are nothing more than an imitation of life. In a footnote they add that any plaything is worthless if it is not fun to use.

“If you have to force or coax a child to play with a toy, it’s a waste of money,” he says, “The popularity of educational toys was the result of high-powered salesmanship, backed up by fancy psychology, that tried to teach mothers what children should have instead of telling them what kids always have liked,” He sighs lugubriously. “That’s the trouble with the business. Adults buy the toys. If kids shopped for their own stuff, everybody would be a lot happier.” [“There’s No Other Store Like This,” Stanley Frank, Dec 14, 1946]

For years, the Ultimate Christmas Toy was a Monopoly set. Monopoly hit the market in 1935 and made a fortune for Parker Brothers Inc., and becoming the most successful board game in history. In the decades that followed, the Parker executives reviewed hundreds of new board-game ideas, hoping to find the next big money-maker. They received hundreds of proposals for new games, but few seemed promising.

In 1957, within two weeks of the launching of Sputnik I, the company got a hundred Sputnik games. Half the games sent in today concern space travel, and Parker is fed up with them—inventors love them but people don’t buy them.

“I have no idea why some subjects sell while others don’t,” says Edward P. Parker [grandnephew of the company’s founder]. “Every time we make up a theory, we’re proved wrong.”

Members of the board (no pun intended) at Parker Brothers found almost all new ideas were variations on old standards.

The company could probably survive if it made nothing but Monopoly, but Parker has some 150 games in stock and produces a half-dozen new ones each year. The firm makes over 10 million sets yearly. No one knows the total number of all games sold annually in the U.S., but a rough guess is 50 million. [“Pass Go And Retire,” Roy Bongartz, April 11, 1964]

At the time of this article, 1964, the company was selling one million Monopoly games each year. Today, 275 million have been sold and Hasbro, who owns Parker Brothers, claims that over one billion people have played the game. And Monopoly is just a small part of the American toy industry, whose sales exceed $20 billion each year. No wonder toymakers spend their years, and fortunes, to create the next Ultimate Christmas Toy.

Yet one inventor struck it rich by accident — and help from his two-year-old son. Richard James was a nautical engineer who conducted performance testing on battleships. One of his tools was a torsion meter, which tested the horsepower delivered to ships’ propeller shafts. To get an accurate reading of torsion, free of the ship’s vibration, the meter was suspended by a spring. One day at work, James knocked one of these springs off his desk and noticed how it bounced and flipped. He showed it to his boy.

James’ son, Tommy, liked one as a plaything. So did a neighbor boy who came down with measles. So did other children. The engineer had a vague feeling that he ought to do something with this device, but it was Tommy who showed him the possibilities. The boy put one on the steps of their home, pulled the top of the spring down to the next step, and to James’ surprise this talented hardware walked gravely down.

James immediately set out to design a toy in which this trick would be perfected. A piston-ring company manufactured a few for him in the fall of 1944, but toy dealers weren’t interested. Less than a month before Christmas a department store phoned to say James could use the end of one counter, but would have to serve as salesman. No little embarrassed, he and his wife turned clerks on November twenty-seventh and sold their entire supply—400—in ninety minutes.

In the last few weeks of the year, the toy made more money for them than James had earned all year in a good engineering job. By Christmas 22,000 had been sold, and by October of this year James was manufacturing 22,000 a week. He had sold 430,000, had his own business, his own little factory, and had quit marine engineering cold.

While high-tech toys come and go, the Slinky remains popular, impervious to toy fashion. And while it might never again be an Ultimate Christmas Toy, it is something almost as good — a toy that can be enjoyed by more than one generation.