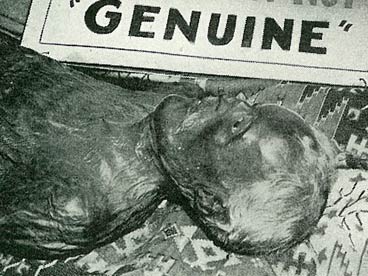 In all his years of playing Romeo and Mark Antony, nothing earned him more attention than his performance on the night of April 14, 1865. That fact must surely have occurred to John Wilkes Booth in the days after he murdered Abraham Lincoln. He might have preferred being remembered as the greatest tragedian of his time, but he could be content with the enduring reputation as the Confederacy’s great avenger.

But how would he have felt if he knew he’d be remembered as a leathery sideshow attraction — exhibited to the general public for 25 cents (5 cents for children)?

The mummy, referred to as “John” by its owners, toured the country in the 1920s and ’30s, oblivious to all the history books. As Alva Johnston reported in 1938:

Historians of the old school allege that John Wilkes Booth was killed in Garrett’s barn in Virginia on April 26, 1865, twelve days after he assassinated Lincoln.

In 1869 the body was turned over by the War Department to the Booth family and buried in the Booth plot in the Greenmount Cemetery at Baltimore. The body was identified by members of the family and by a dentist’s report.

But stories of Booth’s escape sprang to life from the moment of his death. Revisionists soon had two explanations of how Booth escaped from that barn: Theory No. 1, Booth was warned and made his escape several hours before the barn was surrounded; No. 2, he escaped by an unwatched door after the barn was in flames.

In April 1898, American newspapers had carried reports that John Wilkes Booth had been seen in Brazil. … This report brought two witnesses to light who testified that Booth had made his escape in 1865.

The first of these was Mrs. J.M. Christ. … In 1865, according to her story, she and her husband were on board the Mary Porter in Havana six weeks after the assassination when John Wilkes Booth came aboard and sailed with them to Nassau. She stated that, because Booth was still suffering from a broken leg, she gave up her cabin to him, and at the end of the voyage he rewarded her by giving her his ring with “J.W.B.” engraved inside. Having kept the secret for 33 years, Mrs. Christ now felt entitled to talk.

On the following day, Wilson D. Kenzie gave an interview to the same paper. He said that he had known Booth intimately at New Orleans and had been at the Garrett barn in Virginia when the man supposed to be Booth was killed. Kenzie said that the slain man was a sandy-headed fellow who bore no resemblance to Booth.

Then, in 1886, Finis L. Bates notified the War Department that he knew where they could get their hands on the real John Wilkes Booth. He was living in Texas under the name of John St. Helen. Bates had been nursing St. Helen through a long illness and, as Johnston wrote, “On what he apparently thought was his deathbed, St. Helen confessed himself to be John Wilkes Booth.”

The War Department expressed “no interest” in the matter, and Bates let the matter rest until St. Helen’s death in 1903.

An undertaker at Enid embalmed the body in the expectation that the Booth family or the War Department would claim it. It remained unclaimed for years. Bates finally procured it.

This transfer was sanctioned by an Oklahoma judge, apparently on the theory that he would accord decent burial to his former client. Instead of this, Bates set out to commercialize his acquisition. He leased and rented his old friend … to showmen from time to time … and wrote a book with the title The Escape and Suicide of John Wilkes Booth: Written for the Correction of History.

John St. Helen, it turned out, was actually a drifter named David George. Mummified and displayed as John Wilkes Booth, he proved to have none of his namesake’s box-office appeal.

The post-mortem career of this John Wilkes Booth … has been marked by almost continual failure and disaster. He has scattered ill-luck around almost as freely as Tutankhamen is supposed to have done. Nearly every showman who exhibited John has been ruined.

John … has had a strange knockabout existence. He has been bought and sold, leased, held under bond, kidnapped and seized for debt; has been repeatedly chased out of town by local authorities for not having a license or for violating other ordinances; has been threatened with hanging by indignant [Yankee] veterans. Up until 1937 he has been a consistent money loser.

At the Waco Cotton Palace, the mummy attracted the attention of William Evans, the Carnival King of the Southwest, who started John on his big-time career. Evans had intended to use John as the headliner of his carnival, but the new attraction was a disappointment from the start. John never paid expenses.

It brought Evans nothing but bad luck. He suffered setback after setback in the carnival business, until he finally quit and retired to a small potato farm at Declo, Idaho.

The mummy toured less frequently over the years, and was last seen in public in 1976, shortly before it became the property of a private collector.

Could the lonely drifter David George have been John Wilkes Booth? Even if Booth had escaped his death in a Virginia barn, would he have denied himself all the recognition and notoriety he’d gain by revealing his identity?

In his days on the legitimate stage, John Wilkes Booth had been a great actor. Some of his contemporaries thought him greater than his father, Junius Brutus Booth, or his brother, Edwin Booth.

John Wilkes Booth was, however, an almost perfect ham. Vanity was his ruling motive. His assassination of Lincoln was an act of pure vanity. Booth had gone through the Civil War without fighting; he could not bear to have the war heroes towering over him; he killed Lincoln in the hope of stealing the show from the fighting men.

The poor ham broke into history, but it might have given him pause, back in 1865, if he could have looked forward to 1920 and could have seen what was left of him competing unsuccessfully with bulldog-faced cows and six-legged sheep.