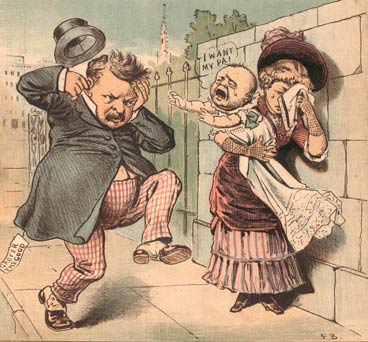 There’s always the hope, with the start of every presidential campaign, that this time it will be different. This year, maybe the candidates will offer intelligent, practical solutions to the country’s problems. They emphasize what they’ll do, not dwell on the many shortcomings of their opponent.

And usually we’re disappointed. No matter how earnest and well-intentioned a presidential campaign begins, by the time it approaches the finish line, it usually assumes an atmosphere somewhere between a carnival midway and a bar fight.

We had an intelligent, respectable election once, and the winner was George Washington. By the time the next election came around, the gloves were off and the tar buckets filled, as Jack Anderson pointed out. [The Pulitzer-prize winning author’s article—”The Dirtiest Campaign Tricks in History”—appeared in the Post on November, 1976]

In the 1796 election, John Adams suffered a blow when the Boston Independent Chronicle alleged that during the Revolution he had publicly supported Washington while surreptitiously attempting to have the General cashiered. In truth, it was Adams’s second cousin, Sam, who had sought Washington’s scalp.

Andrew Jackson [was portrayed by his opponents] as a bloodthirsty wild man; a trigger-happy brawler; the son of a prostitute and a black man… his older brother had been sold as a slave [and] Jackson … had put to death soldiers who had offended him. Worst of all, Jackson and his wife were depicted as adulterers. Through a technical mixup, Rachael Jackson had married Andrew before her first husband divorced her. “Ought a convicted adulteress and her paramour husband be placed in the highest offices of this free and Christian land?” screamed the Cincinnati Gazette. Rachael succumbed to a heart attack before the couple could move into the White House, and many of Jackson’s advocates attributed her death to the calumnious campaign of 1828.

In 1839, Martin Van Buren was accused of being too close to the Pope, when, in fact, he had done little more than correspond with the Vatican in his job as Secretary of State under Andrew Jackson. His opponents, nevertheless, spread the canard that a “popish plot” was afoot to ensure Van Buren’s election.

During the Polk-Clay race of 1844 the Ithaca, New York, Chronicle [quoted] … one Baron Roorback … [who] had witnessed the purchase of 43 slaves by James K. Polk. The entire story was a hoax. Polk had purchased no slaves; in fact, there was no Baron Roorback. But that didn’t keep the story from gaining wide attention.

During the campaign of 1864, Lincoln was tagged with every filthy name in the political lexicon, from ape to ghoul to traitor. Midway through his first term, his detractors accused his wife of collaborating with Confederates, a charge which compelled the President to appear, uninvited, before a Senate committee which was secretly considering the allegations [and swear to his wife’s innocence.]

The campaign of 1884 held the dubious honor of being the dirtiest in American history. … In July, the Buffalo Evening Telegraph … accused Cleveland of fathering an illegitimate son a decade earlier in Buffalo. It turned out that Cleveland, a bachelor, had dated the child’s mother, as had several other men. The boy, therefore, was of questionable parentage. Yet the inherently decent Cleveland had provided for him. A chant soon arose in Republican ranks: “Ma! Ma! Where’s my pa? Gone to the White House, ha! ha! ha!”

Cleveland’s opponent, James G. Blaine … involved in a business scandal. A railroad line had permitted him to sell bonds for a generous commission in return for a land grant. “Burn this letter!” Blaine instructed one cohort in a cover-up attempt. Thus evolved the Democratic comeback to Cleveland’s critics: “Blaine, Blaine, James G. Blaine, the continental liar from the State of Maine.”

Warren Harding… became the subject of a whispering campaign about his ancestry. A great-grandmother, it was alleged, had been a Negro, and a great-grandfather had Negro blood.

The dirty tricks don’t end once the ballots had been cast, either.

In the election of 1876, Democrat Samuel Tilden won the popular election but fell one electoral vote shy of a majority. The electoral tallies in several states were counted and recounted, juggled and changed, until finally the election was thrown into the Congress. A Republican Senate and a Democratic House set up an Electoral Commission to decide the winner. Through some political maneuvering that fairly reeked of scandal, Republican Rutherford B. Hayes was declared the victor.

Lyndon Johnson first won his Senate seat in 1948 by an 87-vote margin when 203 previously unnoticed ballots were miraculously discovered several days after the election. The “voters,” curiously, had approached the polls in alphabetical order, and 202 of them had cast their marks beside the Johnson name. This election gave LBJ his nickname of “Landslide Lyndon.”

Dead men not only vote in American elections; occasionally they are candidates. Philadelphia’s Democratic party bosses, for example, ran a dead man in last April’s primary. The cadaverous candidate was Congressman William Barrett, who departed the scene fifteen days before the election. The party hacks kept Barrett’s name on the ballot in the hope that uninformed voters would select him anyway. Thus the bosses could handpick his replacement.Barrett won.

Next: The Big Change in Presidential Campaigns