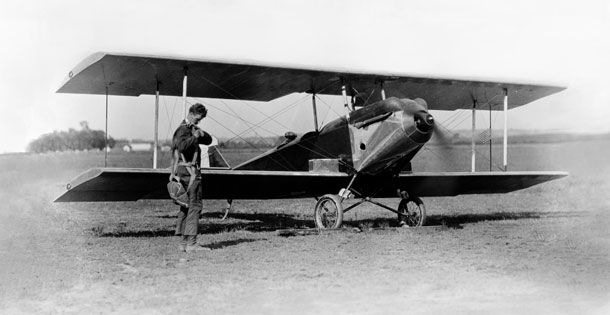 Charles Lindbergh adjusts his parachute in front of Sergeant Bell’s experimental biplane on Lambert Field, St. Louis, Missouri, in the mid-to-late 1920s, while Bell waits in the plane.

On a soft April morning in 1939, Charles Lindbergh was summoned to the White House to meet President Franklin D. Roosevelt, arguably the only person in America who equaled him in fame. The images of the two men had been indelibly impressed on the nation’s consciousness for years–Lindbergh, whose solo flight across the Atlantic in 1927 had mesmerized and inspired his countrymen, and Roosevelt, whose energetic, confident leadership had helped jolt a Depression-mired America back to life.

When Lindbergh was ushered into the Oval Office, he found FDR seated behind his desk. It was their first face-to-face encounter, but no one would have guessed that from the president’s warm, familiar manner. His head thrown back, with his trademark cigarette holder tilted rakishly upward, Roosevelt exuded charm, joie de vivre, and an unmistakable air of power and command. During his 30-minute chat with Lindbergh, he gave no sign of the many grave problems weighing on his mind.

He was, in fact, in the midst of one of the greatest crises of his presidency. Europe was on the brink of war. The month before, Adolf Hitler had seized all of Czechoslovakia, violating the promise he had made at the 1938 Munich conference to cease his aggression against other countries. In response, Britain and France had promised to come to the aid of Poland, the next country on Germany’s hit list, if it were invaded. Both Western nations, however, were desperately short of arms, a situation that FDR was trying to remedy. But he was faced with a dilemma. Thanks to the provisions of neutrality legislation passed by Congress a few years earlier, Britain and France would be barred from buying U.S. weapons once they declared war on Germany. As Roosevelt knew, his chances of persuading the House and Senate to repeal the arms ban were close to zero.

But he mentioned none of that in his conversation with Lindbergh. Nor, in the course of his genial banter, did he betray any hint of the considerable suspicion and distrust he felt for the younger man sitting opposite him.

Less than seven years after his history-making flight, the 32-year-old Lindbergh had become a divisive, controversial figure. In 1935 he had taken his family to live in England, then France. During his three-year stay in Europe, he made several highly publicized trips to Nazi Germany, where he inspected aircraft companies and air force bases–and made clear he thought that the German air force was invincible and that Britain and France must appease Hitler.

And now he was home, ostensibly to join General Henry “Hap” Arnold, head of the Air Corps, in an effort to build up America’s own airpower as quickly as possible. But was he plotting something else? The last thing Roosevelt needed was a campaign to stir up public opposition to the idea of arms sales to Britain and France. He had invited Lindbergh to the White House to get a sense of the man, to try to figure out how much of a problem he might pose in the turbulent days to come.

During his session with Roosevelt, Lindbergh was well aware that the president was scrutinizing him closely. Writing later in his journal, he noted, “Roosevelt judges his man quickly and plays him cleverly.” Although he thought FDR “a little too suave, too pleasant, too easy,” Lindbergh still enjoyed the encounter. “There is no reason for any antagonism between us,” he observed. He would continue to work with the administration on ways to improve the nation’s air defenses, but, he added, “I have a feeling that it may not be for long.”

He was right. In early September, just five months later, Hitler invaded Poland, and Britain and France declared war on Germany. The following spring, German troops swept through Western Europe, vanquishing France and threatening Britain’s survival. As unofficial leader and spokesman for America’s isolationist movement, Lindbergh emerged as Franklin Roosevelt’s most redoubtable adversary in what would become a brutal, no-holds-barred battle for the soul of the nation.

But all that changed after the Japanese attacked Pearl Harbor in December 1941 and Germany and Italy also immediately declared war on the United States. In the days following, Charles Lindbergh, hoping all would be forgiven, did his best to return to active duty in the Army Air Forces. Naively, as it turned out, he believed that his earlier opposition to Roosevelt might make him “of more value [to the administration] rather than less. It seems to me that the unity necessary for a successful war demands that all viewpoints be presented in Washington.”

It became increasingly obvious that the administration had no intention of granting Lindbergh’s request. The chief naysayer was Secretary of the Interior Harold Ickes, who, in a memo to Roosevelt in early 1942, insisted that Lindbergh was intent on overthrowing the government and that if he were allowed to become a war hero, “this loyal friend of Hitler’s” would emerge as a rallying point for all of Roosevelt’s opponents. “It would be a tragic disservice to American democracy,” Ickes argued, “to give one of its bitterest and most ruthless enemies a chance to gain a military record. …He should be buried in merciful oblivion.” In his response, the president said he agreed “wholeheartedly” with “what you say about Lindbergh and the potential danger of the man.”

Henry Stimson was handed the assignment of giving Lindbergh the bad news. In a tense meeting in Stimson’s office, the secretary of war informed Lindbergh that he was loath to bestow a position of command on someone “who has shown…no faith in the righteousness of our cause,” adding that he didn’t believe such a person could “carry on the war with sufficient aggressiveness.” In reply, Lindbergh said he would not retract his view that entering the war was a mistake. But, he added, now that the decision for war had been made, he supported it and was eager to help in any way he could. Stimson, however, remained adamant. Nothing could or would be offered to a man whose loyalty, in the eyes of many, was still in question.