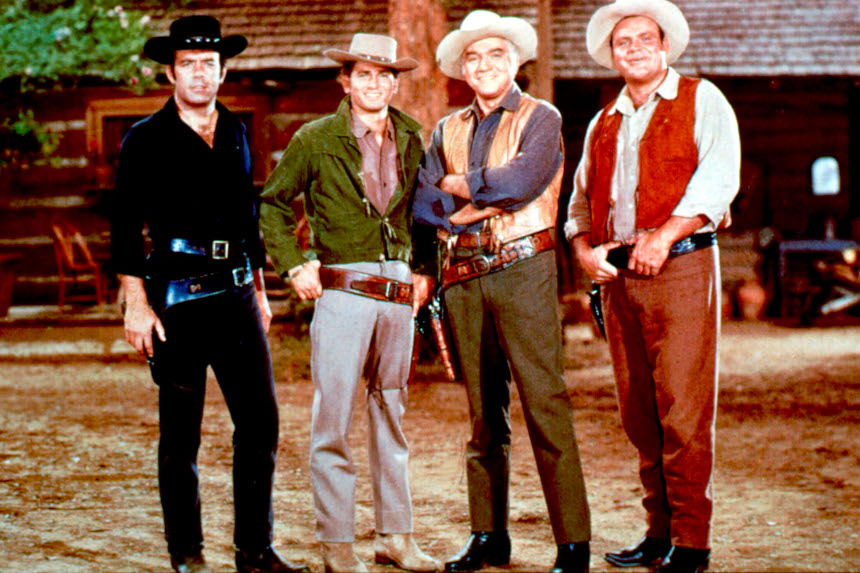 Bonanza remains one of the most beloved American television series of all time. Created by David Dortort, the combination of western setting, action-packed stories, family drama, and occasional laughs proved to be a potent one, keeping the show on the air for an uncommonly long run. Today marks the 60th anniversary of its debut. Here’s a look back at 10 things that you might not know about the show.

Bonanza almost got cancelled early on because of its larger budget. However, it was the first show shot and broadcast in color, and RCA (which owned NBC at the time) used the show to drive interest in color televisions. A move from a Saturday time-slot to a Sunday spot allowed the series to flourish.

The ongoing saga of rancher Ben Cartwright, his sons, and the action and drama surrounding their Ponderosa ranch, clicked with audiences. Bonanza broke through as the first show to stay in the Nielsen top five for nine consecutive seasons.

4. The Theme Song Had Lyrics

You wouldn’t know if from the opening credits or the version shown in syndication, but the theme song did have lyrics. In fact, it had multiple sets of lyrics, one even penned by series star Lorne Greene. Johnny Cash played a version containing words of his own. A sequence was actually filmed for the pilot episode that had the cast singing the song, but it was cut.

5. There Was a Cap on Cartwrights

When the show launched, the focus was on Ben Cartwright (Lorne Greene), and his three sons: Adam (Pernell Roberts), Hoss (Dan Blocker), and Little Joe (Michael Landon). Roberts wasn’t happy with the grind of network TV (at the time, the show was on a 34 episode-per-season model, as opposed to the 22-episode model that broadcast would settle into in later years); he also had concerns about his character and considered departing. The producers temporarily introduced the very popular Guy Williams (TV’s Zorro) as cousin Will Cartwright; after he was featured in five episodes, Roberts decided to stay and Williams was shuffled off (don’t worry about him; he quickly became everyone’s favorite space dad, Dr. John Robinson, in Lost in Space). However, Landon and Greene made it known that any other male leads introduced couldn’t be Cartwrights, lest the network decide to summarily swap out any of the lead actors with another “family member.” When Roberts did leave after Season 6, none of the additional male leads (like David Canary, who played Candy in 91 episodes) were adult Cartwrights.

It wasn’t safe to be a woman around the Ponderosa. Ben Cartwright was widowed three times; hence his three sons by three different mothers. The Cartwright men had various love interests, but none stuck around and many died or left town. In a fit of irony, Roberts’s Adam character had originally been slated to leave with a new wife and daughter; when the actor decided to stay, the producer ushered out Guy Williams by having the woman fall in love with his character instead, facilitating an exit for all three characters.

7. Blocker’s Death Hastened the End of the Show

Blocker passed away suddenly in May of 1972; following gall bladder surgery, Blocker developed a pulmonary embolism and died. Going into the 14th season, efforts were made to try to adjust for the genial giant’s absence. Canary was brought back and a new character, Griff, played by Tim Matheson, was added for some youth appeal. With ratings dwindling, the network axed the show. Both Landon and Greene would later express the belief that the show had lost something essential and irreplaceable when Blocker, and his character Hoss, died.

After years of successful syndication, Bonanza returned to TV in the form of three TV movies. The first, 1988’s Bonanza: The Next Generation, saw Michael Landon Jr. play Benjamin Cartwright, the son of his father’s character. Since Lorne Greene had recently passed away, the creators introduced the character of Aaron Cartwright, Ben’s brother (played by John Ireland) as the new patriarch. Landon Jr. reprised his role in two further TV films in 1993 and 1995. Landon Jr. works primarily as a director and producer today; he is the executive producer of the hit Hallmark show When Calls the Heart and its spin-off When Hope Calls.

Lorne Greene’s daughter, Gillian, played Jennifer Sills, Benjamin’s love interest, in the first TV movie. She also continued her film career as a director, and is married to Spider-Man and Army of Darkness director Sam Raimi. Dan Blocker’s son, Dirk, also appeared in the TV movies, playing Fenster; he is presently a regular cast member on Brooklyn Nine-Nine, where he has played Detective Michael Hitchcock since the first season.

10. There Was a Prequel Series

Dortort, who was still working into the 2000s, developed a prequel for the PAX-TV network (now ION). He hired Beth Sullivan, best known as the creator and executive producer of Dr. Quinn, Medicine Woman, to oversee the series as showrunner and writer. The series was set 10 years before the original and featured a younger Ben Cartwright with teen versions of Hoss and Adam and a younger Little Joe. The show ran only one season, from 2001-2002, with low ratings and high costs cited as the culprit for cancellation.

Bonanza remains one of the titans of TV; it was one of its longest running primetime dramas and a bastion of the western. While the genre continues on TV today with modern versions like Yellowstone and streaming series like Frontier, the saga of the Cartwright family remains present in the hearts of fans that grew up with the show or discovered it later in syndication. In this climate of constant reboots and remakes, it wouldn’t be surprising at all if another version of the Ponderosa rose to continue the story.