Recently, using the filibuster, Senate Republicans blocked voting rights legislation that would have expanded voter registration and voter access. Nearly the same thing occurred 130 years ago with the Federal Elections Bill, although in 1891, the roles were reversed. Here’s the story of how and why that bill met its demise.

The Civil War had ended 25 year earlier, but Reconstruction was in trouble.

Formerly enslaved people in southern states were not enjoying their full civil rights, despite passage of the 13th Amendment abolishing slavery, the 14th Amendment granting citizenship and equal civil and legal rights to everyone born or naturalized in the U.S., and the 15th Amendment protecting voting rights of all citizens regardless of race.

States’ rights could not supersede the federally guaranteed rights of citizenship. And yet, African Americans in the South were routinely denied their rights as citizens. They were subjected to poll taxes or literacy tests at the polls. In addition, the Ku Klux Klan used violence to intimidate Black voters and keep them in a condition not much different from what they’d known before.

In 1870 and 1871, the Republicans passed three bills intended to protect Black Americans’ rights to vote, hold office, serve on juries, and receive equal protection. The bills also gave the federal government the right to step in and protect their rights when states did not. They were referred to, collectively, as the Enforcement Acts.

The first of these acts, The Enforcement Act of 1870, gave federal courts the power to guarantee African Americans’ right to vote. It authorized the president to call in the military to enforce the 15th Amendment, and federal marshals to charge offenders. The next Enforcement Act, in 1871, gave the federal government the right to oversee local and state elections. The third, known as the KKK Act of 1871, allowed the president to use the militia to suppress conspiracies against the federal government and suspend the writ of habeas corpus to suppress the Klan. Hundreds of Klansmen were arrested and prosecuted, and more than 2,000 Klansmen in South Carolina fled the state to escape the law.

Once Black Americans were given the vote, Republicans assumed they’d all cast their ballots for the party of Lincoln. But because of voter suppression in the southern states, the expected Republican bloc of voters never emerged. The Democrats in the South regained power and, in 1884, a Democrat — Grover Cleveland — was elected president for the first time in 24 years.

The election of 1884 was marked by a higher than usual volume of mudslinging. Aside from any balloting irregularities in southern states, Republicans claimed that fraud had helped the Democrats to victory.

At the next national election, in 1888, the Republican platform declared, “The Democratic majority owe their existence to the suppression of the ballot by a criminal nullification of the Constitution and laws of the United States.”

It gave the government unprecedented authority to overcome voter suppression and enforce the 15th Amendment, moved elections for the House of Representatives under federal instead of state control, and authorized federal circuit courts to appoint federal supervisors of congressional elections. These supervisors were empowered to attend elections, inspect registration lists, verify information given by questionable voters, administer oaths to challenge voters, prevent illegal immigrants from voting, and certify the count.

Just as significant, it gave federal officials and courts the power to overturn questionable election results after they had been declared and certified by state officials.

Senator Hoar was motivated by his outrage that violence and fraud in southern elections was threatening to undo all that the Civil War had accomplished. Congressman Lodge said,

The government which made the black man a citizen is bound to protect him in his rights as a citizen of the United States, and it is a cowardly Government if it does not do it! No people can afford to write anything into their Constitution and not sustain it. A failure to do what is right brings its own punishment to nations as to men.

Democrats countered that the bill was partisan, unnecessary, costly, probably dictatorial, and an unconstitutional empowering of the federal government over states. Not a single Democrat voted for it when it came to the House, where it passed nonetheless.

The Senate was a different story.

The Republicans were no longer the unified party that had supported Lincoln through the war. While many Republicans were still concerned that Black Americans were ensured their civil rights, other Republicans were focused on the party’s pro-business, pro-economic development platform. Their chief concern was putting a protective tariff in place.

Senators from western states represented another faction. Their objective was “free silver,” a policy that would expand the money supply by authorizing unlimited coinage of silver on demand. They joined with Democrats in the Senate to delay consideration of the bill so the silver issue could be addressed sooner.

Historian T. Adams Upchurch has also observed that the civil rights of African Americans might not have been strongly supported in the West where the rights of Chinese immigrants and Native Americans were being denied.

When, at last, the Federal Elections Bill came to the floor, Democrats launched a filibuster, which ended in when the Senate voted to end debate.

And with the defeat, Congress halted its efforts to ensure the civil rights of Black Americans for decades. Not until the Voting Rights Act was passed in 1965 did the federal government actively take up minority rights in elections. In the following years, Congress expanded the powers of the act five times. 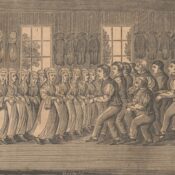