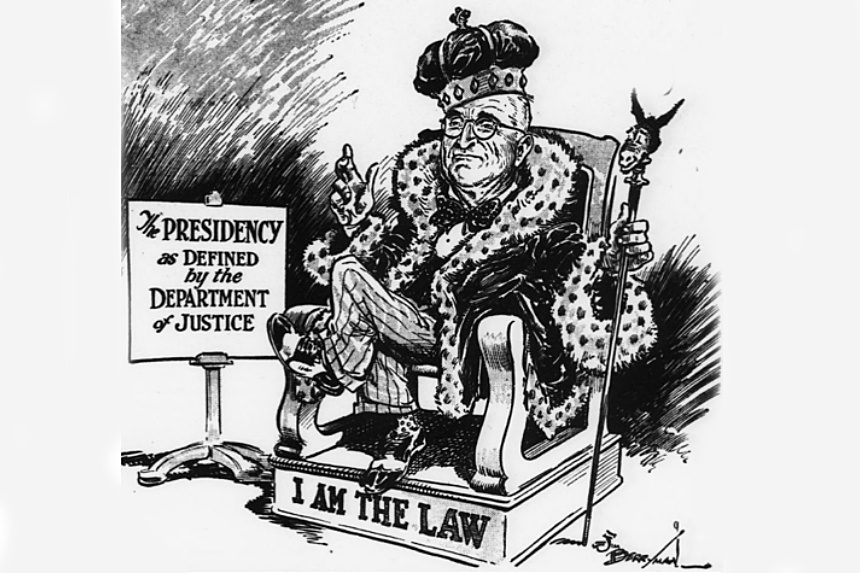 Cartoon by Jim Berryman from the April 26, 1952, Evening Star

Likening public figures to Hitler has become so common today that it has lost some of its shock value. But it would have had more impact in the years immediately following the defeat and death of the German dictator. Which is why it’s surprising to read that, in 1952, President Harry Truman was being called “an American Hitler.”

The reason for the label were his actions to prevent the steel industry from shutting down in the middle of a war.

The government had imposed limits on wages and prices during World War II. And, now, as America entered the Korean War, Congress again established price limits and wage caps for industries involved in defense work. These industries were expected to manage workers’ demands for higher wages, if the amounts were within the federal limits. Otherwise, arbitration would be taken to the Wage Stabilization Board.

One of the most critical wartime industries was steel production. Steel workers had generally not benefitted from postwar salary hikes. Now, with steel being vital for manufacturing war materiel, steel workers felt they could force management to agree to their demands.

The 1950 Defense Production Act permitted wage hikes up to 10¢ an hour. The steel unions asked for a 14 ½ cent increase to their salaries, which averaged around $1.81 an hour.

Mill owners claimed they couldn’t afford such an increase without raising the price of steel, which was prohibited by price controls.

Negotiations were eventually referred to the Wage Stabilization Board. After talking with both sides, the Board recommended an hourly raise of 12 ½ ¢ per hour, rising to 15¢ in six months, and 17 ½¢ in one year.

The steel producers refused, said that such a wage hike would cause irreparable economic harm if they weren’t allowed to raise the price of steel. They made a low counter offer. The steel workers’ union turned it down and voted to strike on April 9.

Truman was worried that the strike would endanger America’s war efforts in Korea. As he saw it, the lives of soldiers depended on the steel mills staying open. He considered three options.

President Wilson had done this during the First World War. In 1917, when America’s railroads became bogged down from the increased demands of wartime shipping, Congress had given Wilson the power to nationalize them for national defense.

During the Second World War, Montgomery Ward & Co. was a major supplier to the armed forces that refused to honor bargaining agreements with its unions. President Roosevelt ordered the government seizure of Montgomery Ward’s plants and facilities in six different states.

But Congress had already considered and discarded the idea of giving the president peacetime authorization for such seizures when they had been debating the Taft-Hartley Act.

One day before the strike was to begin, Truman decided on a bold move. Without Congressional authorization, he ordered the Secretary of Commerce to take possession of the nation’s steel mills and keep them running for the length of the war. It was an unprecedented claim of executive power.

The New York Daily News proclaimed “Truman Does a Hitler.” The president of Weirton Steel said, “Hitler and Mussolini did the same thing in Germany and Italy as Truman has done in the United States.”

The Saturday Evening Post called it “a flight into pseudo dictatorship.” Referring to Truman’s reputation of representing the interests of the “little man” in America, the editors observed, “Hitler began his career as the friend of the ‘little man.’”

A lawsuit from a steel mill was not long in coming. Just weeks after Truman’s seizure of the mills, U.S. District Judge Pine ruled the act “illegal and without authority of law,” and ordered the mills returned to owners.

When the case went to the Supreme Court in May 1952, Truman’s solicitor general argued that the circumstances of war required steel mills to stay open. A strike would endanger American soldiers. Truman was given the power to nationalize the mills in his capacity as commander in chief.

But the steel companies’ lawyers argued nothing in the Constitution gave the president such power. And Congress, when debating the Taft-Hartley Act in 1947, had previously denied such power.

The Court decided, 6 to 3, that Truman’s seizure of the steel mills essentially created a law which, Judge Hugo Black wrote, “must stem either from an act of Congress or from the Constitution itself.”

Many Americans were relieved. Truman’s actions had seemed rash and raised a natural concern of what other powers he might claim. Americans could remember five years earlier when he had threatened he would draft striking railway workers into the Army. And, the Post recalled, there was “his hint that the way to curb meat prices might be to seize the beef cattle on the plains.”

The Court’s decision left Truman shocked. Five of the justices had been appointed by Roosevelt; Truman had appointed the other four. He had assumed they would support him.

The mills were returned to private ownership and the union struck. More than 600,000 steel workers walked off the job, and the mills shut down for seven weeks.

Fortunately, the steel produced before the strike was enough to meet demand until production resumed. Eventually, management and labor came to an agreement. The steel mills raised salaries by 21¢ hour and increased workers’ fringe benefits, but only because the Commerce department had — against Truman’s wishes —given them permission to raise their prices by $5.65 a ton.

Truman never doubted he’d done the right thing. When informed of the public opposition to his actions, he replied, “Tell ‘em to read the Constitution … The president has the power to keep the country from going to hell.”

Truman might have become the first president to be compared to Hitler, but the act of comparing political opponents to Nazis had been done years earlier — and by Truman himself. In a 1948 speech in Chicago, he compared members of the Republican party to the fascists who seized power in Japan, Italy, and Germany, adding that these “crackpots” were a bigger threat to America than the communists.