Pick and clean, scorch off hair, wash, and cut up. Rub each piece with salt and sift a little pepper over. If very young, it may be put in the skillet and fried at once. Otherwise turn a small teacupful of water over, cover tight, and boil 20 minutes. When the water has dried out, put in a heaping spoonful of fried meat gravy, set the skillet on the top of stove, and fry till brown.

If gravy is desired, mix one egg with a dessertspoonful of flour and a cupful of milk — first making the flour smooth as for starch — and pour over the chicken when done, setting the pan in the oven long enough to cook the egg. —“Bill of Fare for Winter,” The Country Gentleman, January 17, 1884

Take small spring chickens — large chickens will not be satisfactory — separate the joints, dip them each in egg, then in corn meal or white meal. Meanwhile, have your pan ready with boiling lard, and never put in additional lard while cooking the chicken. Lay as many pieces of chicken in the pan as will lie comfortably without squeezing. Fry a light brown, first on one side, then on the other; have a hot dish in which to put the chicken — keep hot. Make the sauce with the remains of the frying by putting a little cream, pepper and salt, and mixing nicely; throw in a little chopped parsley and pour the sauce around the chicken. Salt the pieces and roll them in flour. Have the skillet hot, with plenty of lard at smoking heat. Allow the chicken to brown quickly on all sides. Then reduce the heat, add a little water from time to time and cook until very tender — an hour is not too long for a good-sized bird. When done make a rich cream gravy. Baking-powder biscuits are the best accompaniment for this dish. We dress the chickens to be fried here the day before and leave them on ice. The next day we cut them up, saving out the giblets and bony pieces to make a stew for the next meal. If we are opulent in butter, which is usually the case here, we salt and lightly pepper the nice pieces, dust them in flour, and place them to fry in a skillet of hot fat or butter. We do this quickly, turning the pieces until they are golden brown.

Who doesn’t like fried chicken — if it is tender, juicy, and easy to eat? While the method of cooking to be described is not true frying, it offers simpler cooking and meat that has every appearance of fried chicken. Many eating places famous for their fried chicken use this method of preparing it.

Cut up the chicken into serving pieces, two halves for small chickens and quarters for larger sizes, or as for fricassee — 4 to 8 servings — for the largest bird.

If the bird is to be halved or quartered, first break the major joints. This makes for easier eating, more uniform and more satisfactory cooking. The pieces are flattened and stay flattened during the cooking. For each 1 1/2 pounds of bird, use 1/3 cup of flour, 1/2 teaspoon of salt, and dash of pepper, if desired, and rub thoroughly into the surface of each piece. This coating is important to absorb surface moisture which keeps the meat juicy and avoids disagreeable spattering in frying. The pieces are then ready for frying, although many people prefer to have it dipped into beaten egg and crumbs after the flour coating.

Start cooking in fairly hot fat deep enough — about 3/4 to 1 inch layer — so that the pieces need to be turned only once to give a nice browning on outside. In frying, the larger pieces should be fried first, and better results come if the pieces are not crowded in the pan both in the frying and oven cooking. Transfer to covered casserole or roasting pan and cook in a slow to moderate oven, 300 to 350°F, from 1/2 to 1 1/2 hours depending upon the size.

The browning process may be done several hours, or even a day, in advance of the baking and serving time. It has the advantage of removing every trace of frying near or at mealtime. If the flavor of butter is desired, brush the surface with melted butter just before serving. Gravy may be made from the fat drippings left from the baking pan, adding more from the frying pan, if necessary.

—“Savory Surprises with Spring Chickens” by Kathryn Bele Niles, The Country Gentleman, May 1, 1938

French-frying chicken is a full-time job, but with a thermometer clipped to the side of the kettle of deep fat you can be surer of temperatures. First step in this kind of frying is to quarter or halve the chicken. Then dip in thin batter or in egg and crumbs. The batter makes a smoother coating, less likely to slip off and be left behind in the frying kettle. A mixture of one egg beaten up with three quarters of a cup of milk, one cup of flour on the scant side, and a teaspoon of salt is a good cover batter for chicken. When you are ready to dip and slide the chicken in gently, have the kettle of deep fat heated to about 350° F. Again “hot but not smoking” is the word for it.

The moisture in the chicken makes the hot fat bubble and boil. So leave a safe margin at the top of the kettle and have a care for your own skin. A pair of kitchen tongs may prevent a burn on the hand, and they are easy on the chicken. With tongs, you can turn and lift each piece without piercing the brown crust and letting out juice.

Chicken completely immersed in deep, hot fat fries quickly. Started at 350°F, quarters of medium-sized young chicken are usually done in 10 to 15 minutes if you keep the temperature of the fat between 300 and 325°F.

That’s why restaurants feature this kind of fried chicken in their cooked-to-order service. But if more convenient, it can be finished slowly in the oven. I find it best, though, when it moves out of the frying kettle onto the plate with only a brief pause on thick absorbent paper to drain and get a sprinkling of salt and pepper.

—“Six Things to Be Thankful For” Continental Can Company advertisement, The Saturday Evening Post, November 11, 1941 It’s something of an adventure to delve into the secrets of herbs and spices and flavorings. The artistry of cooking becomes a reality. Monotony of flavor is exchanged for tangy piquancy. So, in an experimental mood, let’s serve up some highly appetizing dishes, herb-seasoned to taste. You’ll want to try … a good quarter of a teaspoon of ground mace, nutmeg, or ground ginger to your country-fried chicken. A Hint from Heloise

Nothing is printed in her column unless Heloise has tried it and knows that it works. In Hawaii, she hired neighbors to come and help with the testing. Once they fried chicken 50 different ways in every kind of utensil on the market. (They decided you can’t beat an old cast-iron pot with a few drops of yellow food coloring added to the shortening ‘for a golden crust that looks like an artist painted it.’)

—“Dishrags to Riches: The Saga of Heloise” by Maxine Cheshire, The Saturday Evening Post, March 2, 1963

The chicken fried in the Midwest is usually a large semi-adult bird, little short of the classification of hen. The Southern fried chicken is a barnyard subdeb, rarely more than 10 to 12 weeks old and weighing from a pound and a half to two pounds. Midwestern housewives moving to the South and buying frying-sized chickens at Southern markets are usually afraid they have been sold quail. That the younger, tenderer bird is the better suited for frying would seem to be unanswerable. Yet bad cooks have made it of ill repute with too much grease and weird coatings of batter. Actually, it requires merely a rolling in flour or a mixture of flour and meal, and frying in an adequate amount of hot fat. A suitable recipe for fried chicken may be had as follows:

Wash pieces of chicken well. Salt and pepper and roll each piece in flour, coating well — this will give the chicken the brown crust. Heat fat in skillet, add chicken, but do not place pieces on top of each other. Place lid on skillet so that steam will escape — this will prevent the outer crust from getting soggy. Sauté underside 15 minutes on medium heat until a golden brown. Then turn and brown the other side 15 minutes longer. Remove chicken from skillet when very tender and place on brown paper to absorb excess fat.

A two-and-a-half-pound chicken should be cooked 20 minutes on each side. Select chickens weighing 2 1/2 pounds or a little over; smaller ones lack flavor and cook up waxy. Wash well and quarter. Rub thoroughly with soft butter and sprinkle generously with parsley and marjoram. Let stand for 1 hour at room temperature. Then roll in flour to which salt and pepper have been added. Melt the butter and lard in a heavy skillet and brown the chicken on all sides. Pour cream over it and let simmer, covered, for 20 minutes. Serves 6. In 1977, the Kentucky Fried Chicken mogul let us in on his secret for fast fried chicken — but he kept the 11 herbs and spices to himself:

“They say you can’t cook chicken in seven minutes, that it doesn’t get done, doesn’t get hot enough. They’ve got all these charts about the temperature and the time. I don’t know a damn thing about those charts, but I do know when the kitchen used to get to 120 degrees it was too damn hot for me to fry chicken.”

“Now, chicken is like a vegetable. It’s fresh and it’s delicate and it doesn’t like to sit around too long in a fryin’ pan. Still, it’s got to get hot enough to cook. Which means it takes too much time, destroys the delicate flavor. And, too, I don’t like the idea of keeping people waiting — you know, there’re other things to do — so along about 1939, after I’d tried everything else, I started preparing chicken in a special pressure cooker. The chicken fried quickly, it didn’t use a lot of oil, and it didn’t dry out inside because of the short cooking time which sealed in the natural goodness. I worked up the herbs and spices to bring out the flavor of the chicken — it’s the same formula they use in all 5,000 Kentucky Fried Chicken shops all over the world, and nobody’s improved on it yet.”

—“How to Make a Million After You’re 65” by Colonel Harland Sanders, The Saturday Evening Post, March 1977 and “The Man in the White Flannel Suit” by Starkey Flythe Jr., The Country Gentleman, December 1977

This chicken has the crispness and taste of fried chicken without the calories or cholesterol.

In plastic bag, combine all dry ingredients. In shallow bowl, combine milk and egg. Dip chicken, one piece at a time, into plastic bag to coat thoroughly. Dip into milk/egg mixture; coat again with dry mixture. Place in large shallow baking pan; drizzle oil over chicken. Bake at 400°F for 45 to 50 minutes or until tender and golden brown. Serves 4.

Tip: This coating mixture can also be used for fish. 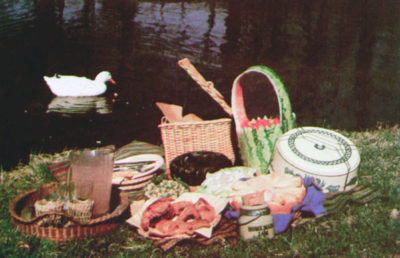 This recipe gives you what you really should want — chicken that is “fried to the bone.”