Cartoons of Christmas Past—from as far back as the ’40s—show that getting ready for December 25 is never easy.

Holiday shopping can be stressful, so we hope these cartoons help you keep your sense of humor!

Cartoons: Let’s Get Down to Business

You’ll really fall for these cartoons that celebrate the first crisp days of autumn.

Cartoons: The Funny Thing About Marriage…

In the wise words of Ben Franklin, “Keep your eyes wide open before marriage, half shut afterwards.”

Cartoons: Back to School

It’s back-to-school time, and we’ll all need a sense of humor to get through it! 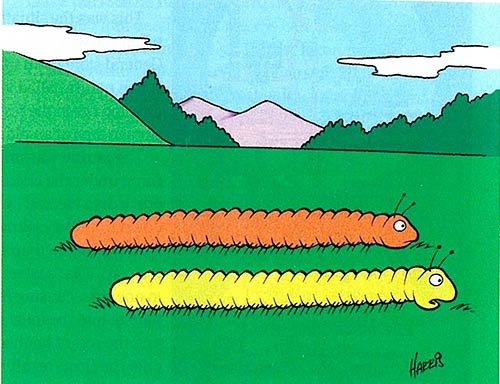 “I haven’t slept a wink since my husband developed restless leg syndrome.”
July/August 2010 They say that laughter and fishing are both cheaper than therapy, so we decided to combine the two!

“…Hmmm—quite a few fishermen.
Now raise your hand if you’re a golfer.”
July/August 1998

“The doctor put you on a fishing diet?
Are you sure he didn’t say fish diet?”
September/October 1999

Remember being a kid and wondering if an adult was serious or just yanking your chain? These cartoonists know the answer! “Behave yourself or I’ll tell your mother you have talent.”
November/December 2011 “A Frank Sinatra cassette and a little too much wine. That’s where babies come from!”
January/February 1996 “While many disagree as to when life really begins, most feel it’s after work.”
January/February 2009 “Zip up your jacket and put on your hat…your mother’s cold.”
January/February 1999